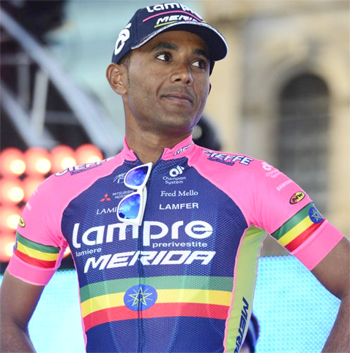 On July 2, Tsgabu Grmay will make history as the first Ethiopian to race the Tour de France when he lines up with Lampre-Merida. The 24-year-old made his grand tour at last year’s Giro d’Italia and also rode the Vuelta a Espana.

“The participation in the Tour de France it’s my long time dream. Thanks to God now I am going to do it!,” Grmay said in a release from his team, adding that he first saw the Tour in 2007. “I was so excited to see such cycling champions battling on the great climbs.

“I am so so so happy. I still I can’t believe that I am going to do the Tour! As I said, the Grande Boucle is my long time dream,” he said. “It was very long way coming from Ethiopia to race the Tour de France: few years ago, when you were thinking about coming from Ethiopia and participating in the Tour de France, it was something impossible for me and for all Ethiopian people. But now this thing is going to change… I am going to show that is possible and I am really really happy and proud.”