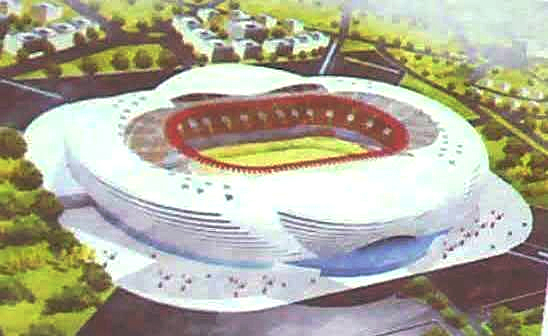 A cornerstone was laid today for the construction of a stadium in Harari regional state, dubbed Awe Abadir, at a cost of more than 1.5 billion birr ($70 million US).

When completed, the stadium will have a seating capacity of 56,000, but could easily accommodate as many as 100,000 standing fans.

The construction work of the stadium will be conducted in three phases. The regional state has allocated a 600 million Birr budget for the initial phase, which is expected to be completed by December 2016, when Harari will host the 11th Ethiopian Nations, Nationalities and Peoples’ Day festival.

Minister of Sports and Youth, Redwan Hussien and chief administrator of Harari regional state, Murad Abdulahi, laid the foundation stone for the over 56,000-seat international standard stadium to be built on 19 hectares of land.

The construction of the stadium is part of Ethiopia’s target to build international standard stadiums and recreation centers in all regional states and city administrations in the second Growth and Transformation Plan (GTP-II), Redwan said at the groundbreaking ceremony.

Murad on his part said the regional state would give due attention for the completion of the stadium within the coming five years.

According to him, the first phase of the construction of the stadium is expected to be completed early December 2016.