After the Walyas made headlines for their 7-1 capitulation in Blida at the hands of the Desert Foxes, expectations among Ethiopian fans that their team might pull off an upset of any kind were understandably low, despite the home field advantage and the high altitude at Addis Ababa stadium. Ethiopian fans, despite the packed stadium, more or less saw the second clash with Algeria as the match that would see any 2017 AFCON qualifying hopes realistically die. But perhaps the lack of pressure benefited the Ethiopian side, because over the course of 90 minutes, they were the more entertaining and ambitious of the two teams. Algeria managed to pick themselves up from the shock of going a goal down three times and equalize thrice to salvage themselves a draw.

We rated the Ethiopian players on show in what was one of the most entertaining games of football seen so far in AFCON 2017 action.

The Mugher Cement stopper couldn’t be blamed for the fragilities of his defence which were the cause for the team’s conceding three goals. All in all, he had another satisfactory performance at national team level under his belt. He pulled off a fantastic save to deny Yacine Brahimi a goal from close range and did his chances of becoming the number one keeper no harm, especially after Tariku Getnet’s shambolic showing in Blida.

Much improved from his disastrous showing in Blida, Alula was defensively sound and involved himself in the buildup to several Ethiopian attacks. The Saint George man made space for himself to maraud up and down the flank, offering an attacking option to his teammates.

Defensively solid, Aschalew’s continuous consistent performances in the back four over 2015 and 2016 will have him under the scope of foreign scouts. Against Algeria, he didn’t get a foot wrong, but his brilliant display in defence will be overshadowed by the not so brilliant play of his defensive partner, Anteneh Tesfaye.

A day to forget. One of Yohannes Sahle’s recruits, he was at fault for all three goals. The Sidama Buna player failed to backtrack and let Islam Slimani run in free when he was initially marking him for the first goal. He was beaten in the air by Aissa Mandi for the second goal, and his reckless challenge on Brahimi merited a penalty which was converted for Algeria’s third goal. He will still most likely be preferred to Yared Baye, but is still far from reliable.

The Adama Kenema defender showed his experience and managed to key tabs on a frustrated Riyadh Mahrez all game. Suleiman is the sixth or seventh left back that Coach Yohannes Sahle has tried during his term and he may have discovered his most solid left back a little too late…nearly at the end of his stint as coach. Didn’t offer much of an attacking threat but did what Tekalign Dejene miserably failed to do, prevent the Leicester man from being influential.

The big man was a dominant figure in the middle of the park, snipping Algerian attacks in the bud, while coordinating waves of attacks on the Algerian goal. He gave us an early indication of what was in store with a long range attempt with barely a minute on the clock that stung the palms of Algerian keeper Rais Mbolhi. All in all, the Ethiopian Coffee man did everything that was expected of him.

Tadele was the most creative player on the pitch and was a constant thorn in the side of the Algerians with his passes and silky skills. The Arbaminch player tormented the Algerian defense and his instinctive outside of the boot curling pass caught the Algerians off guard several times, especially when he delivered the ball into the run of the incoming Getaneh Kebede who finished for Ethiopia’s second goal. Taken off after 70 minutes, the Ethiopian attack lost some of its rhythm and tempo after Tadele’s departure. He was utterly poor when the two sides met at this venue in 2014, but this time round, he managed to conjure up the magician in him.

Ramkel was a much more threatening presence in the attacking third for the Walyas on this occasion, combining well with his teammates and drifting slightly offside and side footing the ball home before seeing his goal correctly ruled out. But as has happened time and time again, Ramkel lacked cutting edge and didn’t exhibit the talismanic showing expected of your number ten. The Saint George man looked visibly frustrated at times, and faded towards the end of the game. He will need to up his game a gear if he hopes to keep being called up to the national team.

The slight build of Shemeles Bekele proved impossible to bulldoze despite repeated attempts to foul him into submission. The Egypt based playmaker was a handful for the Algerians, with his through balls, crisp passing and on the ball confidence keeping the opposition second guessing his next move as he generated move after move from the middle of the park. Captain on the day, he exhibited the dynamics of his game, with the fans cheering his skillful moves and turns.

“Tusa” was surprisingly overlooked for the captain’s armband. Involved in his team’s attacking movements, he wasn’t as sharp or influential as he normally is. He couldn’t create the same attacking spark down the left flank that the likes of Tadele Mengesha and Alula Girma displayed down the right. Withdrawn at the break as he was in Blida, it has been a frustrating couple of games for the veteran. 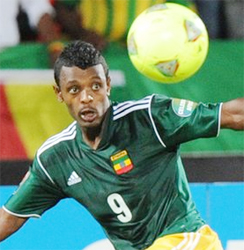 A “Man of the Match” performance by the University of Pretoria striker, who has now managed to score five goals in his last four international games. A poacher’s finish from close range for the first goal, he did well to poke the ball precisely past the keeper and into the goal to get his brace. Getaneh, who was the league’s top scorer and best player during the 2012-13 season, probably benefited from the presence of many his Dedebit ex teammates, with Tadele, Behailu, and Dawit all alongside him in Ethiopian colours. His search for a hat trick saw him unleash a low drive that Rais Mbolhi spilled into the path of Dawit Fekadu for the third Ethiopian goal. He was simply unstoppable on the day, after managing to score Ethiopia’s only goal in the 7-1 drubbing four days ago.

Brought on at half time, he immediately made a difference, freeing up Tadele Mengesha with a cheeky back heel passed ball which Tadele threaded in for Getaneh to score. The Getaneh-Dawit strike partnership was instrumental in Dedebit’s 2012-13 title win, against the Algerians Dawit had the easiest of finishes from close ranges that natural goal mouth hunters like Dawit have made their name on. Faded towards the final whistle, and ultimately unfortunate not to see his goal turn out to be the winner. A decent performance from Dedebit’s all time leading scorer in African competition.

Came into the game with twenty minutes left as the Ethiopians were trying to shore things up in the middle and hang on to the lead, he worked hard with Gathuoch in an attempt to keep the Desert Foxes at bay as they grew increasingly desperate in the closing stages. He didn’t exhibit his usual flair and creativity going forward.

He was brought on with eight minutes to go as Yohannes Sahle tried to strengthen things at the back. The young right back can look at his cameo appearance as an accomplishment, considering that he spent a lengthy period of the season out injured.

Author: Zecharias Zelalem, who uses the pen name Zecharias Etyopia, is a Montreal (Canada)-based contributor to Ethiosports.com. He can be reached via his Facebook page.