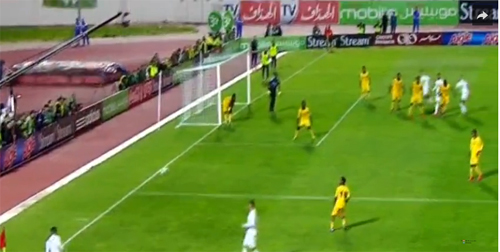 In what was one of the worst days in the history of Ethiopian football, the Walyas were on the receiving end of an absolute pummeling by the marauding Algerians. This 7-1 result has sucked the wind out of Ethiopia’s 2017 AFCON qualifying aspirations and Coach Yohannes Sahle will only be able to look back on a campaign that started somewhat promisingly, and went horribly wrong in a setting so often the scene of Ethiopian football collapse, Blida Stadium.

We at Ethiosports analysed individual performances of the losing team and have compiled a list of player ratings for the Ethiopian players involved.

The Dedebit keeper was left woefully exposed by his defense and made a number of saves in the first half that kept the score at a respectable 2-0, but in the second half, his ill judgment and blunders cost the team dearly. Abel Mamo’s odds of winning the number 1 jersey have surged.

Alula Girma’s worst international showing was long touted to be his performances in the 2-1 defeat to Algeria in 2014 that left him out of the national team for a while. But in Blida, he may have outdone himself. An extremely careless challenge resulted in a penalty, and he was constantly left exposed at the back.

Torn to shreds on too many occasions, he was left a sitting duck for the likes of Brahimi and Feghouli. A liability in a makeshift defense, Ethiopia was unable to cope with the absences of Saladin Bargecho and Walid Atta.

From Ethiopia’s extremely shaky back four, Aschalew exhibited much more confidence on the ball and attempts at creating forays forward. But just like the rest of the team, his abilities faded in the second half and couldn’t fare much better than his teammates during the onslaught.

He was pulled out of position countless times. The occasion was just too much for him and his getting nutmegged capped off his horror showing at left back. Zecharias Tuji, Abebaw Butako and Mehari Mena are waiting in the wings.

A normally reliable presence in the Ethiopian midfield, he was left in a trance with the crisp passing of the Algerians. His stamina and fighting ability left him in the second half and he was lazily caught failing to back track on too many occasions. Still, he popped up with a brilliant through ball that resulted in Ethiopia’s consolation goal.

The Dashen Beer midfielder will hope to forget the day he was first played as captain of the Ethiopian national team. Besides being a shredded umbrella unable to provide any protection whatsoever for the Ethiopian back four, he gave possession away on too many occasions. He was handed the armband and played his worst game in a national team jersey.

Completely absent and failed to provide any attacking threat down his flank in a first half that despite the somewhat respectable score line, saw Ethiopia restricted to the confines of their own half for nearly the entirety of the 45 minutes. He was withdrawn at half time.

Handed the number 10 jersey, he was unable to live to the aura of his jersey number and let alone provide playmaking options, he was rarely seen playing in his position. In the first half he provided defensive cover several times, but offered nothing in terms of service or a serious push forward. Another poor performance in the colours of his country will have people questioning his status as a national team starter.

So often the sparkplug in the Ethiopian attack and a source of inspiration, he was given no room to operate, marshalled out of the midfield and given no breathing space whatsoever. One on one with the keeper, he was uncharacteristically caught for pace and fumbled his side’s best goal scoring chance of the first half. A couple glimpses of his skill were seen, but for the most part, any attempt to maneuver past his markers resulted in his giving possession away to the opposition.

Wasted a perfectly good set piece opportunity and with plenty of Ethiopian bodies pushing forward resulted in an Algerian counterattack and second goal. Was starved of service the entire match and he was left all alone in attack. However, he managed to get one scoring opportunity which he coolly finished.

With his team collapsing in the second half, he was brought on and made three or four crucial interceptions leading to rare Ethiopian attacks. One of those interceptions led to Getaneh’s goal. Despite being a center forward, he was restricted to playing on the wing but did fairly well

He was brought on in the second half.

Came on when it was too late to matter.

Note: Zecharias Zelalem, who uses the pen name Zecharias Etyopia, is a Montreal (Canada)-based contributor to Ethiosports.com. He can be reached via his Facebook page.