Ethiopia is a country with great history & culture. Here are a few of the country’s historical sites that tourists should visit:

Lalibela is a historical site in Ethiopia that has made it on the list of World Heritage Sites by UNESCO. Commissioned by King Lalibela, sometime during the 12th and 13th centuries it took 24 years to construct 11 marvelous churches each carved out of solid rock. Legend has it that the pious King Lalibela who had returned from exile in Israel, decided to build the churches as the second Jerusalem. Archaeologists say it would have taken a work force of 40,000 people to complete this work. Walk through these 800 year old monolithic rock-hewn churches and understand why it’s considered to be the 8th wonder of the world.

Dating back to the early Christian era and beyond, Axum was once the cosmopolitan center of a powerful and expansive civilization. An archeological site named as one of the World Heritage Sites by UNESCO, it is a sight to behold. Visit the St. Mary of Zion Cathedral, the final resting place of the Arc of the Covenant, and try to unravel an age-old mystery. Walk amongst the beautifully crafted giant obelisks or explore the ruins of the imperial palace of the legendary Queen of Sheba and feel the aura of a glorious past.

Harar is a fascinating city where the old and the new coexist. The walled part of the city, known as Jegol, represents the old, well preserved and in good condition. The friendly inhabitants have developed a unique culture that is a blend of the Islamic and the indigenous. Their traditional costumes are as colorful and captivating as the architecture in the city.Walk through the new and old town and feel the organically evolved harmony that prevails. Trace the footsteps of the French poet Rimbaud or shop in the splendid outdoor markets. The dare devil in you may tempt you to visit the Hyena Whisperer where you can feed hyenas by hand. 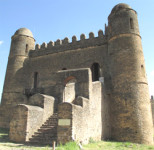 The famous Emperor Fasilides founded the city of Gondar. You will be in awe of the 17th century gothic castles and churches that are still standing and functional. If visiting in the month of January, you will not want to miss Timket, the celebration of the Epiphany, the baptism of Jesus in the River Jordan. This ritual reenacts the baptism in the ancient bathing pool at the castle. Many participants immerse themselves in the sanctified water, symbolically renewing their own baptismal vows. Then the massive crowd escorts the tabot, a replica of Moses’ tablet bearing the Ten Commandments, back to the church in a colorful procession.

Ethiopia is unique in the world in that it is the only country endowed with a greatest amount of fossil remains that span the length of human evolution.UNESCO named the Awash Valley as a World Heritage Site because of its substantial paleo-anthropological and archaeological resources.The discovery of the 160,000-year-old earliest modern human fossil reveals that Ethiopia is where humans first began to walk upright. Other remarkable fossil discoveries such as Lucy (3.18 million years old), Selam (3.5 million years old), and Ardi (4.4 million years old) solidify Ethiopia’s rich prehistoric and paleontological history.Ethiopia truly is the ancestral home to the entire planet.