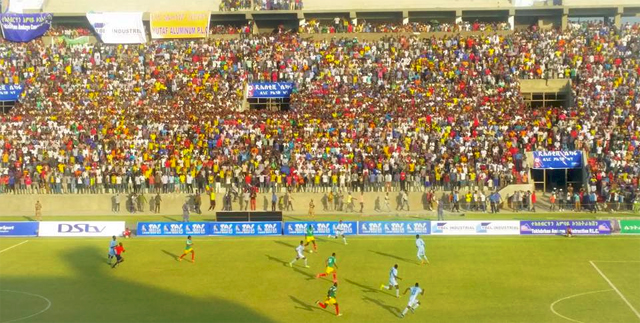 Four games were played on Wednesday at the ongoing CECAFA Senior Challenge Cup in Ethiopia.

The Harambee Stars of Kenya were locked in a one all draw with Burundi in a Group B at the Awassa Stadium.

Amissi Tambwe, making a return to the starting line-up drew first blood for the Burundians on 11 minutes before Michael Olunga restored parity 30 minutes later with his second of the competition.

The opening goal was well-deserving for the early dominance of Alain Ninyungeko’s charges.

Fwadi Ndayisenga played a quick one to Didier Kavumbagu before racing and cutting inside David Ochieng. His low cross across the face of goal was met by Tambwe at the back post for the easiest of tap-ins.

However, Kenya grew into the game and started making meaningful inroads towards their opponents half, with Clifton Miheso, Jacob Keli and Michael Olunga all looking dangerous upfront.

It was no surprise when the trio combined for Kenya’s equalizer. Miheso delivered a deep ball into the Burundi penalty area that was knocked down by Keli into Olunga’s path.

The draw leaves Kenya at the top of Group B on same points with Burundi but with superior goals. Uganda sits third with three points and Zanzibar in that order pointless.

Away in Bahir Dar, Malawi beat Djibouti 3-0 in Group C to bundle them out of the championship after successive defeats. Gerald Phiri opened the Flames account in the 38th minute through a penalty before John Banda added the second on 40 minutes, giving the Southern Africans a comfortable lead at the break.

Back from recess, Malawi attacked seriously giving Djibouti no breathing space and Chiukepo Msowoya sealed victory with a header on 76 minutes to send the Flames top of the group, and a place at the quarters.

The other game of Group C saw South Sudan frustrated their neighbour’s Sudan to a barren draw.

In Group A, hosts Ethiopia earned their first win with a 2-0 win over Somalia at the Awassa Stadium.

Somalia started on a high with several attacks but Ethiopia caught them on the break to score the opener in the 14th minute through Mohammed Nasser.

The host dominated the second half and their efforts paid off on 82 minutes when Behailu Girma tapped home to seal victory.