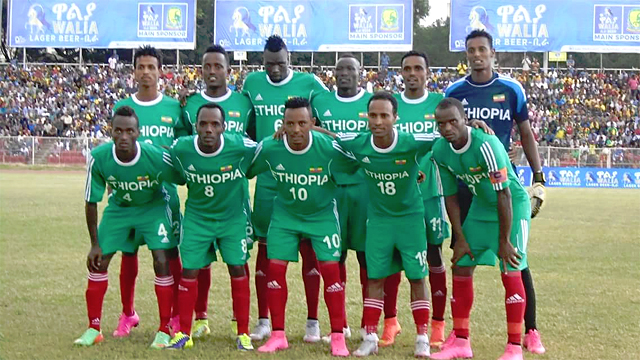 Ethiopia completed a superb comeback with a 3-0 win against Burundi on Sunday in Addis Ababa, to confirm their place at the Orange African Nations Championship (CHAN) Rwanda 2016.

Burundi came into the second leg on the back of a 2-0 lead from the previous fixture in Bujumbura last week.

The hosts were in control for much of the first half. The first chance of the game went to winger Asechalew Girma but his tap-in was cleared off the line. The visitors opted to sit back and defend which came costly in the end.

After taking control of the game, defender Seyoum Tesfaye headed home to open the scores on 37 minutes.

The visitors’ best attempt at scoring came during stoppage time through Nahimana Shasiki, from a free-kick that Ethiopian goalie Tarike Getnet fisted out of danger.

In the second half, Burundi started brightly in search of a killer goal and minutes later, substitute Mustapha Francis unleashed a superb shot that Getnet again dealt with.

Thereafter, Burundi switched back to the defensive mode and Ethiopia will punish them. The Walias got the much needed goal to tie the match on aggregate in the 73rd minute through midfielder Gatoch Panom, who headed home from close range.

Few minutes later, the hosts were rewarded a penalty after Burundian substitute goalie Biha Omar was adjudged to have felled Girma in the penalty area. Panom made no mistake from the spot to complete his brace, and ensure victory in grand style.

After ensuring Ethiopia’s place at the final tournament for the second successive time, Ethiopia head coach credited his players for the feat.

“The experienced players were helping out the new ones. We had 90 minutes to play and we were committed to notch a victory. I talked with the players that we can do a lot of things during the 90 minutes.

“All the credit goes to the players not me. This win is for the people of Ethiopia and I am satisfied with my players for achieving this. Qualifying for CHAN was a total success. We will further measure the success in January in Rwanda.” said Sahle.

One thought on “SUPERB COMEBACK SEE ETHIOPIA THROUGH”