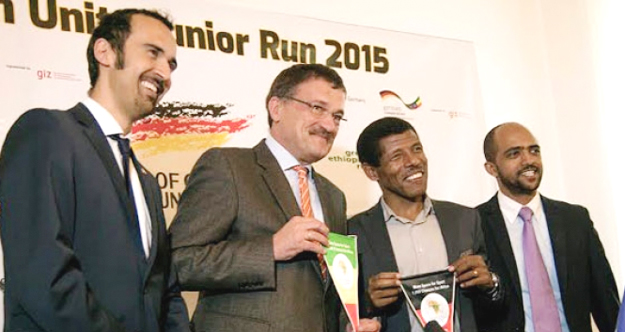 Celebrating 25 years of German unity, this 4km run will be held today with 3,000 young Ethiopians from various schools in Addis Ababa expected to participate and 150 young professional runners engaged in a separate competition.

The run is organized by the German embassy in Addis Ababa and GIZ in cooperation with the Great Ethiopian Run.

“Reunited German has increased its cooperation with Ethiopia, helping millions of Ethiopians to escape poverty, and contributing to modernize Ethiopia’s economy. This is why it was absolute clear for us that we had to celebrate 25 years of German unity with our Ethiopian friends,” Schemdit said at a press conference.

As it was in reunited Berlin that Haile broke his two world records on the marathon distance, he symbolizes like few others the energy and optimism of today’s Ethiopia and the friendship between the two countries, stated the Embassy’s press statement.

“When the German friends told me about their idea of the German unity run, I immediately agreed to help them and be co-patron. Myself, and Ethiopians runners in general, have a special relationship with Germany. I could not imagine a better way to celebrate 25 years of German unity in Ethiopia,” Haile said in his remarks to media representatives.

Making Kebena roundabout the start and finish line, the four km run will pass through –Comoros Street – Côte d’Ivoire Street – Leipzig Square – Queen Elizabeth II street. The two fast professional runners will be awarded a free ticket to German to attend Berlin half marathon on April 3, 2016 and the best 12 runners will receive a full running gear from German company Adidas.

The event will be attended by several VIP guests including the ambassador of the European Union to Ethiopia, Chantel Hebbrecht, GIZ country director, Axel Klaphake and Ethiopian world–class athletes Aberu Kebade, Tirunesh Dibaba and Sileshi Sihen.