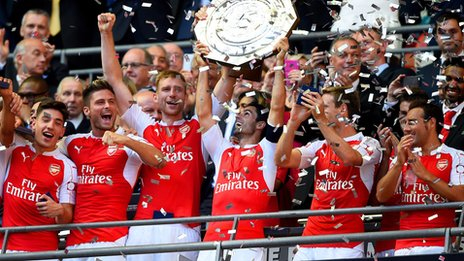 FA Cup holders Arsenal won the Community Shield for a second season in a row as they beat Premier League champions Chelsea at Wembley.

Alex Oxlade-Chamberlain scored the winner with a powerful drive into the top corner with his weaker left foot.

Ramires headed wide unmarked from Loic Remy‘s cross as Chelsea failed to hit the target before the break.

Eden Hazard skied a chance over the bar before Oscar‘s free-kick was parried wide by Arsenal debutant Petr Cech.

It was the first time the former Chelsea goalkeeper had been called into action – after 68 minutes of play – and soon after he comfortably held on to Kurt Zouma’s header.

Arsenal went close late on through Santi Cazorla and Kieran Gibbs in a match where both sides looked rusty a week before their Premier League opener.