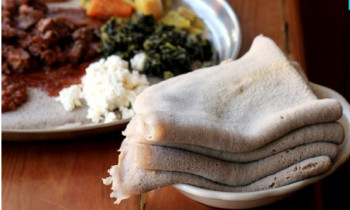 I’m not quite hooked on the stuff, but sometimes I’ve got to have it. On any given day in my diaspora life, I’ll be stunned into compliance and stop at an Ethiopian store to buy mixed-flour injera prepared in Canada, or splurge for the real deal: a sealed bag of pure teff injera, imported from Ethiopia.

Unsealed, it frees a waft of subtle aroma, transporting me instantly to my grandmother’s kitchen. When she lifts the lid of her mitad, a billowing cloud of nutty steam envelops us before revealing a perfectly round sheet of spongy, thin injera. Blinking with its thousand “eyes,” the sour bread begs to be peeled off the scalding clay, cooled on a wicker sefed woven to size, and then draped over a wide-mouthedmesob basket.

Nowadays, grandma’s kitchen is a registered business named after her and one of her daughters, who manages day-to-day operations. Equipped with four mitad, Yimegnushal & Yeshi Injera sells the desired floppy, feather-light sheets to area residents and small merchants. Larger bakeries ship injera by the thousands to members of the diaspora, for whom making pure teff injera remains a losing battle — a situation not helped by the fact that, due to rising international demand, the teff grain (injera’s only ingredient besides water) is banned from leaving the country.

Teff was exclusive to its native Ethiopian Highlands for millennia, thanks to geographic and cultural isolation. According to folklore from the Aksum region, where teff has been cultivated since between 4,000 and 1,000 B.C., the ancient Ethiopians’ king and god was a dragon whose descendants ruled for centuries, exacting terrible tributes, until a northerner named Gebgebo trapped the ruling dragon and split its head with an axe. On the spot where the blood spilled, the first teff plant grew.

That teff wasn’t named after the dragon-slayer is probably due to its size. Referring to the smallest grain in the world, early farmers must have said “teffa” (“it is lost,” in Amharic) so often that the word became synonymous with the grain. Of the 350 species of lovegrass — the plant genus to which teff belongs — only teff is cultivated for food, using an old method of scattering handfuls of seed over moist loose soil. Six months later, after the backbreaking harvest work of stalk drying, threshing by man and beast, and manual winnowing is complete, the grain is ground whole for transforming into injera.