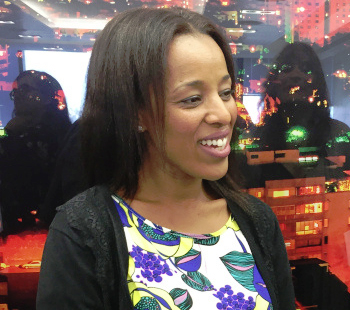 Met with Deputy Mayor of Tel Aviv, Mehereta Baruch-Ron, an Ethiopian born Jew who migrated to and resettled in Israel at the age of 10.

We listened attentively as she spoke to a delegation of journalists who are the guests of the State of Israel Ministry of Foreign Affairs at City Hall, Tel Aviv.

Her story is a fascinating one beginning in Ethiopia where she lived with her family and extended family of Ethiopian Jews. They lived separate from other Ethiopians and were not necessarily welcomed. Let her tell it, she grew up hearing the Bible stories told to her by the community elders who visualized their future, which included a move to Jerusalem, the promise land. Of course as a little girl she dreamed of this place never seen but existed solely in her mind based on pictured she formed from the stories she heard.

Then the day came that she was informed that they would be making a sojourn to Israel and her heart fluttered and yet for all the happiness it stirred in the hearts of all, the sacrifice to get there was far more than they ever thought it would be. And the danger was greater. Many could not make the journey for numerous reasons health, age and then those like her mother did not leave because she stayed behind to attend to her parents who could not make the journey.