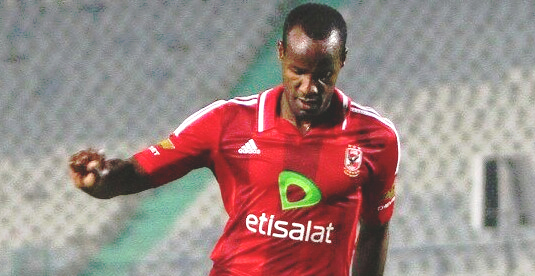 Addis Ababa, Ethiopia – Ethiopian striker and captain Salhadin Said has been heavily linked with a move to Algerian top side MC Algiers a deal that could be finalized in the coming days Soka25east.com can reveal.

Salhadin Said who currently plies his trade for top Egyptian side Al Ahly has niot had a smooth transition in the team since suffering a nagging knee injury that kept him out of action for a long time sidelining him from the starting team.

However his return from Injury has meant he can only get glimpses of matches played by his club Al Ahly having going down the striking pecking order.

Salhadin Said was on the mark when Ethiopia played Lesotho in an Africa Cup of nations qualifier where he scored the decisive goal to give Ethiopia the deserved 2-1 win.

MC Algiers have been keen on the player and a close source intimated to Soka25east.com that Sala was ready to make the move to re-establish his career away from Egypt.He joined Al Ahly from another Egyptian club Wadi Degla other offers are also said to be coming from the South African PSL league.