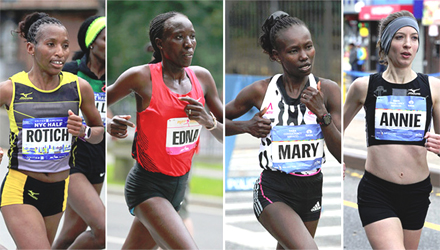 “We are excited to welcome such an elite field of women from across the globe to the storied history of the Oakley New York Mini 10K, one of NYRR’s most recognizable heritage events,” said Ciaccia, who also serves as the race director of the TCS New York City Marathon. “Our pro field featuring Mary, Caroline, Edna, and Annie will run with thousands of women of all ages and abilities. This race has always been a celebration of the power of women in sport, and this year’s edition might be our best ever.”

Founded by NYRR in 1972, the Mini got its name when race founder Fred Lebow convinced the sponsor to support a six-mile “mini” marathon—named for the miniskirt—rather than a full marathon. It was the world’s first road race exclusively for women. The inaugural race had 78 entrants. It has had 168,290 finishers in its 43-year history and has served as a model for women’s road races around the world.

“For over four decades, the Mini has been a great showcase for women in sports,” said Michael Capiraso, president and CEO of NYRR. “Thanks to Oakley, the City and our many volunteers, thousands of inspired runners will once again participate in an event that’s more than just a run.”

“I’m very happy to run again in New York, the place where I made my come back marathon after maternity and was one of the best days of my career,” said Keitany. “Winning the TCS New York City Marathon last year was a very big challenge, and every time I think about the race I get emotional. I know that my competitors will be the top 10K runners in the world, but I hope to be able to make my race for the win again. Thanks to the organizers for inviting me and I’ll do my best to make them and all who love running happy.”

“I am very excited to return to New York City,” said Rotich. “I have always enjoyed racing there and love the energy of the city. I look forward to joining all the other women at the Oakley New York Mini 10K next month.”

“The Oakley New York Mini 10K is one of my favorite races, and I’ve always had good results there,” said Kiplagat. “It is one of the few times every year that we have the opportunity to run in a women’s-only race, and the atmosphere is always a big celebration of women’s running. At the world championships at Beijing in August, I will be going after my third consecutive gold medal, and the Oakley New York Mini 10K will give me a great opportunity to test my speed.”

Bersagel, 32, originally from Greeley, CO, currently residing in Oslo, Norway, is the 2013 USA Marathon champion and the 2006 USA Half-Marathon champion. She represented the United States at the 2014 IAAF World Half-Marathon Championships, finishing as the top American in 13th with a personal best of 1:10:10. She was the second American finisher at the 2014 TCS New York City Marathon and recently repeated victory at the 2015 Düsseldorf Marathon with a personal best 2:28:29.

“This year will be my third Oakley New York Mini 10K and first race back since defending my title in Düsseldorf,” said Bersagel. “ What makes this race so unique is the support from women of all ages—and only women—lining up to run 10K through Central Park. New York City has the best road running fans of any place I’ve raced and it’s always a pleasure to come back.”

About New York Road Runners
Founded in 1958, New York Road Runners has grown from a local running club to the world’s premier community running organization, whose mission is to help and inspire people through running. NYRR’s commitment to New York City’s five boroughs features races, community events, youth running initiatives, school programs, and training resources that provide hundreds of thousands of people each year, from children to seniors, with the motivation, know-how, and opportunity to Run for Life. NYRR’s premier event, and the largest marathon in the world, is the TCS New York City Marathon. Held annually on the first Sunday in November, the race features 50,000 runners, from the world’s top professional athletes to a vast range of competitive, recreational, and charity runners. To learn more, visit www.nyrr.org.

About Oakley, Inc.
Established in 1975 and headquartered in Southern California, Oakley is one of the leading product design and sport performance brands in the world. The holder of more than 750 patents, Oakley is a culture of creators, inventors, idealists and scientists obsessed with using design and innovation to create products and experiences that inspire greatness. This philosophy has made Oakley one of the most iconic and inimitable brands on the market, with products that world-class athletes around the globe depend on to compete at the highest level possible. Oakley is known for its High Definition Optics®, which feature unparalleled optical clarity and precision along with impact resistance and UV protection, incorporated into all of the brand’s sun, prescription eyewear and premium goggles. Oakley extended its position as the world’s leading sports eyewear brand into apparel and accessories. Oakley has men’s and women’s product lines that appeal to Sports Performance, Active and Lifestyle consumers. Oakley is a subsidiary of Luxottica Group. Additional information is available at www.oakley.com.