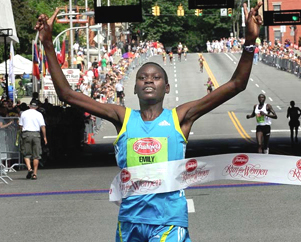 ALBANY, N.Y. (May 19, 2015) — The longstanding rivalry between Kenyan and Ethiopian long distance runners will be renewed once again when the 37thannual Freihofer’s Run for Women 5K takes place Saturday, May 30 at 9:30 a.m. in Albany, N.Y.

These two proud running nations are no strangers to New York’s capital city, and both countries have won three titles apiece over the past six years at this prestigious IAAF silver labeled event.

Team Kenya will be led by two-time Freihofer’s Run for Women champion Emily Chebet (2010, 2013), whose victory here in 2010 (15:12) remains the fastest time ever recorded on the event’s former Madison Avenue course.

“Emily and her teammates will have a new course to contend with this year (http://bit.ly/1J54Cd0),” said Event Director George Regan, explaining that a two-year beautification project at the Empire State Plaza led organizers to shift the course’s start and finish adjacent to the stunning New York State Capitol. “It will be interesting to see how our elite athletes adjust their racing tactics to the new course.”

Joining Chebet — and 4,000 women from more than 25 states and 26 nations — will be compatriot Isabella Ochichi, who represented her nation at 5,000m at the 2004 Olympics and finished third at Freihofer’s in 2013 (15:34).  Other Kenyans in the field include newcomers Ann Wanjiru, 1st at this past weekend’s Rite Aid Cleveland 10K and 2015 Hy-Vee 10K; Monicah Wanjuhi Ngige, whose recent form includes 2nd at the 2015 Rite Aid Cleveland 10K, as well as 4th place finishes at both the Crescent City Classic and Cherry Blossom Run; and, Iona College graduate Salome Kosgei, the fastest woman in this year’s Raleigh Rock ‘n’ Roll Half Marathon. 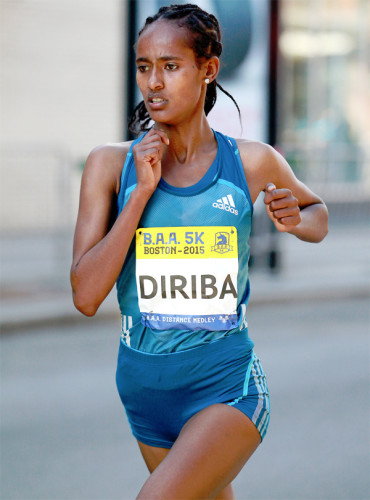 Ready to take up the gauntlet is a group of fleet-footed Ethiopian runners with nothing but victory on their minds.  Leading the charge will be Buze Diriba, gold medalist at the 2012 IAAF World Junior Championships 5000m in Barcelona accompanied by that event’s silver medalist, Ruti Aga, whose accolades this year include a gold medal at Qatar’s Ooredoo Doha 10K and runner-up finishes at the Lilac Bloomsday 12K, Cooper Bridge Run and Hy-Vee 10K.  Diriba and Aga will be ably supported by veterans Meskerem Assefa, a three-time Olympian (2004, 2008 and 2012) at 1500m, and Amane Gobena, runner up at last month’s Paris Marathon and winner of the 2014 LA and Istanbul Marathons.

“It’s always good to see familiar faces in the field mixed in with some newcomers,” said longtime Run for Women Elite Athlete Recruiter John Tope. “I am expecting a riveting battle on the streets of Albany for the event’s $10,000 first place prize.”

Out to play spoiler to these two nations will be two-time Burundian Olympian, Diane Nukuri.  The Iowa City resident, who finished 6th at Freihofer’s four years ago (15:57), is starting to find her groove this year, as evidenced by her bronze medal at the Prague Half Marathon, 13th place finish at the London Marathon (PR: 2:27.50) and 5th place finish at the Manchester Run 10K.  Eritrea’s Nazret Weldu can also not be overlooked.  Her resume boasts solid performances at the 2015 Trier Silvesterlauf 5K (1st) and 2015 IAAF World Cross-Country Championships (11th).

Rounding out another strong Freihofer’s open field will be a group of talented American runners led by local favorite Megan Hogan (Ballston Spa, N.Y.), whose 6th place finish here in 2014 (15:50) made her the field’s top American finisher.  Other confirmed U.S. runners include:

To register for the 37th annual Freihofer’s Run for Women, 28th annual Kids’ Run, 27th annual Community Walk and 5th annual Freihofer’s Junior 3K, visit freihofersrun.com.  Online registration is available through 5/25 at midnight.  In person registration will be held 5/27 (10 a.m. to 6 p.m.) and 5/28 (10 a.m. to 2 p.m.) at Price Chopper Supermarkets’ Westgate Plaza store, as well as 5/29 from noon to 7 p.m. at the CapitalCare/CDPHP Health & Fitness Expo at the Empire State Plaza Convention Hall.  There is no 5K day-of-event registration.

For a map of the new 5K course, as well as event parking locations, please click here http://www.freihofersrun.com/course_change.htm From the event’s home page, you can also join the conversation on the Freihofer’s Run for Women’s social media platforms.

Freihofer’s, a leading baker of wholesome products, is committed to fostering the growth and recognition of women in sports and inspiring all generations of women to experience the benefits of exercise and good nutrition. Freihofer’s continues to set the pace by sponsoring the annual Freihofer’s Run for Women 5K. Now in its 37th year, the event is home to the Master’s World & U.S. All-Comers record and boasts a silver label designation from the IAAF, the world governing body for track and field. It features thousands of women of all ages and abilities from Olympians to recreational joggers, who challenge themselves on the picturesque 3.1-mile course. For more information, visit freihofers.com.