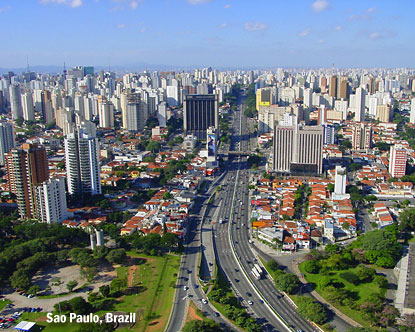 Ethiopian Airlines, the largest airline in Africa, is pleased to announce that it has started serving Sao Paulo, a city in the fifth continent in its route network, with a non-stop flight from Addis Ababa since April 25, 2015.

Ethiopian tri-weekly flights to Brazil are operated using the ultra-modern Boeing 787 from the major hub in Addis Ababa. The start of this non-stop service to Sao Paulo reduces transit stops for customers traveling from the rest of Ethiopian destinations.

Brazil is the largest national economy in South America and the eight in the world. Brazil has a diversified economy including agriculture, industry, and a wide range of services such as ecotourism, leisure and cultural tourism.

Sao Paulo is the biggest city in the country and has significant cultural, economic and political influence both nationally and internationally. The city is home to several important monuments, parks and museums.

“We are very pleased to be able to enhance the quality of our product and improve our competitive edge. The non-stop flight secures increased connectivity and reduced transit time for our customers. The new non-stop Addis Ababa – Sao Paulo flights will provide efficient connections for customers from almost all of our destinations in the other four continents we serve.”Said CEO Tewolde Gebremariam.

Passengers to and from Sao Paulo will enjoy maximum connectivity to destinations in Ethiopian world-wide route network in Africa, Middle East, Asia and Europe. The new non-stop flight will enhance travel on the China – Africa – Brazil trade lane.

Ethiopian commands the lion share of the pan-African passenger and cargo network operating the youngest and most modern fleet to more than 83 international destinations across five continents. Ethiopian fleet includes ultra-modern and environmentally friendly aircraft such as the Boeing 787, Boeing 777-300ER, Boeing 777-200LR, Boeing 777-200LR Freighter and Bombardier Q-400 with double cabin. In fact, Ethiopian is the first airline in Africa to own and operate these aircraft.