Ethiopian Airlines affiliate airline, ASKY Airlines Chief Executive Officer, Yissehak Zewoldi, has tendered his resignation to the board of directors of the company. 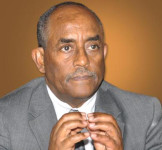 Yisshak has been managing ASKY since September 2013. In a written response to The Reporter Yissehak said that he submitted his resignation to the board of directors of ASKY Airlines led by Gervais Koffi Djondo, former Togolese minister and founder of ECO Bank, last month. The CEO’s resignation is effective May 15, 2015. Yissehak said he resigned from his post for personal reasons.

ASKY is a Pan African Airline based in Lomé, Togo. It was established by the private sector in West Africa in collaboration with the Ethiopian Airlines in 2008. The passenger airline commenced operations in January 2010.

It is the management of Ethiopian Airlines that proposes CEO to the board of directors of ASKY. Bussera Awel was the first CEO of ASKY that served the airline from 2010 to 2013. Yissehak replaced Busera in September 2013. Bussera is currently serving as chief commercial officer of Ethiopian.