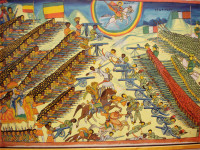 Adwa, Ethiopia (TADIAS) –119 years ago, on March 1, 1896, at the Battle of Adwa, the unexpected happened. Ethiopia, an African country, defeated Italy, a European country. The defeat was decisive and the victory was permanent. More than 100,000 Ethiopian troops, who were led by Emperor Menelik II, were mobilized from all corners of the country and marched to victory at the battle that lasted less than half-a-day. The victory was so decisive, according to Fitawrari Tekle Hawariat, the 20,000 Italian and their ‘native’ soldiers were rushing to surrender and to be declared prisoners of war. –

On March 1, 1896, Ethiopians not only kept their sovereignty and independence, but they also taught a lesson to Italians, for that matter to European colonizers. The lesson was that their colonization agenda’s last chapter was written at Adwa. Adwa, therefore, marked the beginning of a new chapter of anti-colonialism and decolonization and end of colonial occupation in Africa and elsewhere. Ethiopia unburdened what the poet Kipling labeled ‘the white man’s burden,’ that is, the pseudo civilizing missions of the Europeans in Africa. Adwa has demonstrated that Africans can and should always be perceived and accepted as subjects of their own histories and civilizations.