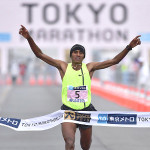 Ethiopia’s Endeshaw Negesse destroyed a quality field including Olympic and world champion Stephen Kiprotich to produce a stunning upset in the Tokyo Marathon on Sunday.

Birhane Dibaba completed an Ethiopian double by winning the women’s race to underline the depth of marathon running in the East African country.

Negesse boosted his hopes of being selected for this year’s world championships in Beijing with a masterful run, leaving the favourites floundering in his wake after an explosive final seven kilometres to clock a winning time of two hours and six minutes flat.

“It was a tough race,” the 26-year-old told reporters. “There was a bit of rain and the cold made it hard work but luckily I was able to hang in and win the race. My dream is to go on and make the Ethiopia team for Beijing.”

Ugandan hero Kiprotich, competing in honour of the memory of his baby daughter Elizabeth who passed away from a respiratory illness last month, put in a late burst to pip last year’s winner Dickson Chumba of Kenya to second place.

The London Olympic gold medallist and world title holder finished a step ahead of Chumba in a personal best of 2:06:33.

Kenyan Dennis Kimetto’s world record of 2:02:57, set in Berlin last year, was never under threat in chilly, drizzly conditions despite the presence of several runners who have gone under 2:05, including two-times London Marathon winner Tsegaye Kebede.

The pint-sized Ethiopian had been jabbering at the pacemakers to speed up over the first half of the race but fell out of the leading pack at the 35-kilometre mark and trailed home in eighth in 2:07:58. Masato Imai was the top Japanese finisher, in seventh place.

Dibaba, runner-up in 2014, won in 2:23:15 while fellow Ethiopian Tiki Gelana, who captured the women’s title at the 2012 London Olympics Games, finished third after arriving in Japan late on Saturday because her flight from Europe was delayed by snow.

Security had been beefed up for Sunday’s race with police and fire services on high alert for a terrorist attack, such as the bomb blast which killed three people at the 2013 Boston Marathon.

Mingling with the 36 000 competitors was a crack unit of police runners wearing cameras that capture real-time footage of the course, while more than 6 000 security officials lined the streets of Tokyo.

The ninth running of the Tokyo Marathon marked the start of a new format comprising the world’s top six races — including Boston, London, Berlin, Chicago and New York — and offering a $1 million purse split between the men’s and women’s champions.