Addis Ababa, Ethiopia – The 12th African Juniors’ Athletics Championships will kick off on Thursday, March 5, at the Addis Ababa Stadium, the organizers announced in a press conference held on Friday at the National Hotel. The continental big event will stay in action up to 8 March, 2015. 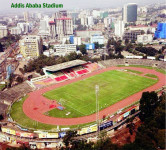 Sports Commissioner Abdissa Yadeta said that the two phase’s preparation scheme is completed as planned. “The first phase is fulfilling the infrastructure while the second is about the national athletics team preparation. In regard to the infrastructure our main focus was over the renovation of the Addis Ababa Stadium in three or so months. The renovation has been successfully completed. Now the stadium provides what is needed by the athletes and spectators,” the Commissioner noted. “Along with this,” the Commissioner added, “The issue of hotels, transportation and other essential things necessary for the competitions are well done. Providing on arrival Visa at Bole International Airport is also facilitated.”

The commissioner said that the Addis Ababa stadium renovation cost was five million birr. “This cost was fully covered by the government. Apart from showing the positive images of the country, organizing such continental event has huge impact on the promotion of athletics sports nation wide. That is why the government has shown willingness to invest on the stadium,” he commented.

Regarding the preparation of the Ethiopian young athletes, the Ethiopian Athletics Federation Training Director Dube Jilo said that 124 young women’s and men’s athlete are ready to represent Ethiopia. “We expect the competition to put together over 700 athletes from 42 countries including Ethiopia. Our country will not take part in marathon, 10, 000m, discus and Javelin throw. But our athletes who were selected after the Assela Championship have been together as part of the preparation for this event,” Dube said.

On this occasion the organizing Committee has disclosed that the Ethiopian Broadcasting Corporation (EBC) who is the main media partner will transmit live the opening and closing ceremony’s and competitions. It was also confirmed that EBC will cover most of the events. “In addition to this agreement has been made with the French based TV station to transmit the events world wide,” Ato Abdissa said. Transmitting the event world wide is not limited to the French based TV station. EBC will also transmit to its international audience through satellite.

Magazines, Brochures and T-shirts are organized in connection to the events. Musical show will also be presented at the National Theatre and the African Union Hall. This kind preparation is helpful to promote the culture of the Ethiopian people.

The event organizers are careful to announce about Ebola. “We know that the Ebola outbreak is not fully controlled. The latest reports about Ebola are encouraging. In the worst hit countries no new cases are registered this time. Decline is what is observed in the three West African countries where Ebola caused heavy damages. But we don’t relax based on theses reports. Every member of the delegation of the 41 countries who will come here for the competition will pass through on arrival Ebola test. In coordination with the Ministry of Health we are ready for that,” the commissioner remarked.

The over all cost of the preparation is 30 million birr, according to the organizers. This doesn’t include the renovation cost of the Addis Ababa stadium.

The event organizers earlier disclosed that the 12th African Youth Championship sponsors are Garad, Ethio-telecom, MOHA Soft Drinks Company, Tsehay Real State, and B.G.I. It was announced that three million birr was collected from the five sponsors. The event’s international sponsors are the International Association of Athletics FThe 12th African Junior Championship will kick off on Thursday, March 5, at the Addis Ababa Stadium, the organizers announced in a press conference held on Friday at the National Hotel. The continental big event will stay in action up to 8 March, 2015.