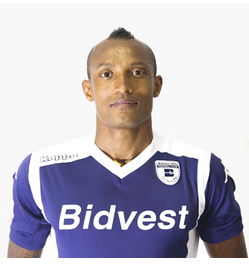 Wits came behind to beat Martizburg 2 goals to 1. New signing Fikru heading home Siyabonga Nhlapo’s cross for his debut goal in Wits shirt at the injury time of the first half. Fikru wore the number 12 shirt;

He signed a 6 month deal on January after leaving Indian side Athletico de Kolkata. Fikru’s club colleague the Ethiopian striker Getaneh Kebede is still finding it hard to start a game for the Johannesburg side. Bidvset Wits sits third on the log with 34 points; Kaizer Chiefs tops the league.

He holds a South African permanent residence permit which allows him to be registered as a non-foreigner.

Locally, he has played for SuperSport United, Free State Stars, University of Pretoria and Milano United.