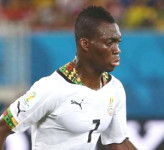 When the Confederation of African Football(CAF) announced the AFCON Best 11 for the just ended African Cup of Nations., the list didn’t include Christian Atsu of Ghana, who was named player of the tournament, but his fellow countrymen Andre Ayew and Jonathan Mensah

As expected the triumphant Ivorians dominated the side, contributing five players, including the Toure brothers Yaya and Kolo, as well as Manchester City newcomer Wilfried Bony.