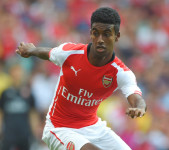 The Twitterverse and Intertubes are abuzz today about Gedion Zelalem, the young soccer player who wants to play for the U.S. national team.

We imagine you have many questions. We’ll try to answer them …

Pardon us for asking, but who is Gedion Zelalem?

Gedion is a 17-year-old midfielder with Arsenal, the prominent English Premier League club based in north London.

Does he actually play for Arsenal?

He plays primarily for the youth squad and, if he remains on his promising trajectory, he’ll continue to be integrated into the first team. He has never appeared in a Premier League match but made the game-day roster three times last season, entered an FA Cup match last January and played the entire second half of an UEFA Champions League match at Galatasaray (Turkey) this month. He also featured for Arsenal’s under-19s in the UEFA Youth League, a junior version of the Champions League (five starts and one goal in the team’s first-place finish in group play this fall).

What position does he play?

He is a central midfielder with superb vision, touch and distribution skills. He can play in a deep-lying position, but because of his slight build, is probably better equipped at this age to operate in a more advanced role so he can concentrate on his footwork and passing rather than physical confrontations in defensive midfield.

Which countries can he represent in international soccer?

One thought on “Gedion Zelalem gets U.S. Citizenship”