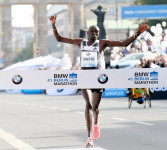 Just like in 2013, the marathon world record was broken again in Berlin. The 30-year-old Dennis Kimetto, with a previous personal best 2:03:45 from a victorious run in the 2013 Chicago Marathon, chopped 26 seconds off his Kenyan compatriot Wilson Kipsang’s mark of 2:03:23 a year earlier.

This year was easily the best marathon year until now in terms of results.

In Berlin, Emmanuel Mutai, also from Kenya, clocked the second fastest non-aided result ever with 2:03:13 for the second place and ran a world record for 30km of 1:27:37 as an intermediate split.

The Chicago Marathon was the second fastest race of the year. The winner there, Eliud Kipchoge, was also the only athlete to win two major ‘big city’ races in 2014.

The fourth fastest time of the year was Sammy Kitwara’s 2:04:28 for the second place in Chicago while the previous world record-holder Wilson Kipsang completed a total dominance of the top five places in the 2014 world list for Kenya.

The 32-year-old won in London in April clocking 2:04:29. Just 18 years old at the time of the race, Ethiopia’s Tsegaye Mekonnen won the Dubai Marathon in January in a world junior best of 2:04:32.