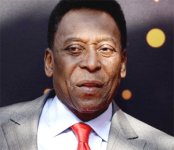 Brazil legend Pele has left intensive care as he continues to recover from a urinary infection.

A statement from the hospital said the 74-year-old “is doing well without medical complications”.

His kidney function will be assessed again on Wednesday but he is “lucid and eating well”, can walk around his room and is receiving “semi-intensive care”.

A World Cup winner in 1958, 1962 and 1970, Pele was initially discharged from hospital on 13 November after surgery to remove kidney stones.

Widely regarded as the greatest player of all time, he scored a world-record 1,281 goals in 1,363 games during his 21-year career.

He made 14 appearances at World Cup finals, scoring 12 goals, and was awarded the Fifa Golden Ball as the best player at the 1970 tournament.