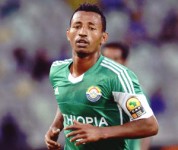 Ethiopian International Abebaw Butako has joined Sudanese giants Al Hilal Omdurman where he is expected to play a crucial role in his his natural left back position.

Abebaw has been in sterling form for both his country and club St.George described the move as a dream come true for him and the beginning of even greater things to come.

“I am very happy to join Al Hilal a team with great football tradition in Sudan and my aim right now is to work hard and continue helping them in both domestic and continental matches.It is the dream of every footballer to play professional football abroad and to me I feel my dream had come true”

“I will miss my team mates from St George and all the fans who made my stay very successful but I would like them to keep on praying for me in my new endeavor while I hope for the best”an elated Abebaw Butako told Soka25east.com

Soft spoken Abebaw Butako cristined “Abe” by his many legions of fans played a crucial role in Ethiopia Walia Ibex road to Afcon 2013 as he was also integral as Ethiopia lost to Nigeria in the 2014 FIFA World Cup qualifiers via play offs.

The speedy and skillful left back is known for his confidence and impressive work rate coupled with neat passes that have ensured the position was firmly given to him by both former coach Sewnet Bishaw and now Portuguese Mariano Barreto.

Addis Hintsa is another Ethiopian who is based in Sudan .

Al Hilal formed in 1930 is a prestigious club with many accolades based in the city of Omdurman in Sudan.They have won seven of the past nine seasons of the Sudan premier League and have won 27 out of the entire 45 seasons since the inception of the league.