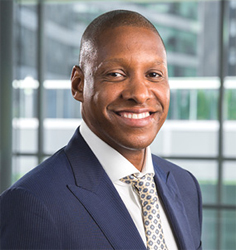 I had the good fortune to become the first African-born General Manager in American sports, a blessed example of someone who was given an opportunity. But as fortunate as I have been, I would be a failure if I couldn’t provide opportunities to the next generation. The league gave me the chance to realize my dreams and now I feel it’s my obligation to work proudly with the NBA Family to give back.

As it does for many people, it all started with my parents. They were always so willing to give, always willing to help other families. I remember that my father’s company in Nigeria had a program where the office would be given a bag of rice. Depending on your level, you would be rewarded with a certain portion of the rice. Now at the time, my father was in a high-ranking position and he received a good amount. However, he always shared. He always took from his rice and gave to his co-workers to make sure everyone could enjoy the rewards of hard work. That was always telling to me. As citizens, we should give back to the community and to those who don’t have as much. Often times, these are people who just haven’t been presented with the right opportunity.

Opportunity for me came in the form of Basketball without Borders (BWB), the global basketball development and community outreach program. I was given the chance to be a scout for BWB and I was exposed to some of the smartest and most-talented front office staff in the world. I remember listening a lot and learning as much as I could. From that opportunity I was offered a team position which led to becoming a GM. But that’s just my story. Thousands of campers have attended BWB, with participants from 31 countries and territories in Africa. The world is becoming a smaller place and, as the game continues to grow across the globe, we can help implement change.