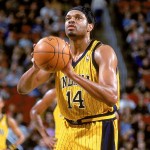 The National Basketball Association (NBA) will be the Host Presenting Partner of the 2014 Beyond Sport Summit & Awards in Johannesburg, South Africa from October 28-30, it was announced today.

NBA Legends Cedric Ceballos and Sam Perkins will take part in the three-day event, which will also include a visit to the Royal Bafokeng Nation in Phokeng, North West Province, interactive panels and sessions at the Nike Football Training Centre in Soweto and the Larry O’Brien NBA Championship Trophy exhibition on the last day of the Summit.

NBA All-Star, and 1992 Slam Dunk Champion Cedric Ceballos and former Olympic Gold Medallist and 1982 NCAA Champion Sam Perkins will play a leading role at the Summit that will explore the ways in which sport can be used to influence social change through a series of community site visits and specially tailored programmes.

During the Summit, Ceballos and Perkins will visit the Royal Bafokeng Nation to engage with the Bafokeng youth and run on-court basketball sessions. The Royal Bafokeng Jr NBA/Jr WNBA Basketball Development Programme, now in its fourth year, is a multifaceted school-based basketball development initiative which aims to promote both basketball and life skills with an emphasis on the value of physical education and sports as part of a holistic approach to education.

“A key driver in our strategic approach to grow the game across the African continent is the opportunity to leverage our sport and the celebrity of our brand to impact positive social change. Beyond Sport also believes in the powerful role of sport in a society and we are grateful for the opportunity to partner with them on this event,” said NBA Vice President and Managing Director for Africa Amadou Gallo Fall. “We are fortunate to have Cedric and Sam working with us in Africa again and trust that their leadership and passion for youth development will make a positive impact on the participants.”

The event will showcase leading sport-for-social-change programmes making a positive impact across the city. With representatives of various international organisations taking part, including UNICEF, Tottenham Hotspur, Boston Red Sox and many more, it provides an opportunity for sharing of best practice from around the world. The event is supported by global partners Barclays, UNICEF and TIME.

For more information and to book your place at the highly anticipated event, visit: http://www.beyondsport.org/event/beyond-sport-summit-2014/

The NBA is a global sports and media business built around three professional sports leagues: the National Basketball Association, the Women’s National Basketball Association, and the NBA Development League.  The league has established a major international presence with offices in 13 markets worldwide, games and programming in 215 countries and territories in 47 languages, and NBA merchandise for sale in more than 125,000 stores in 100 countries on 6 continents.

NBA rosters at the start of the 2013-14 season featured a record 92 international players from 39 countries and territories.  NBA Digital’s assets include NBA TV, which is available in 60 million U.S. homes, and NBA.com, which recorded 26.9 billion page views during the 2013-14 season, with more than half of all visitors originating from outside of North America.  The NBA is the No. 1 professional sports league on social media, with nearly 700 million likes and followers globally across all league, team, and player platforms.  Through NBA Cares, the league and its teams and players have donated more than $242 million to charity, completed more than 3 million hours of hands-on community service, and created more than 915 places where kids and families can live, learn, or play.

Beyond Sport is a global organisation that promotes, develops and funds the use of sport to create positive social change across the world.

We do this primarily through…