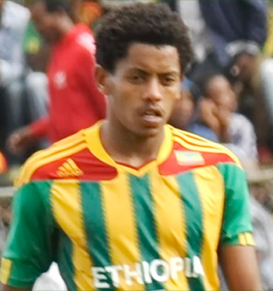 Addis Ababa, Ethiopia – His name is Natnael Zeleke. As a young kid, he started playing soccer with his neighborhood friends, a local group called “Raye”.

And due to his great performance during that time, he got transferred to play for Saint George Youth team and currently, he is selected by the Ethiopian National Team coach Mariano Barreto to play for the National Team. Even though he has not yet played for his club, he showed much potential, caught the attention of the coach and was selected in the starting lineup of the Walias. Dawit Tolesa of The Reporter conducted an exclusive interview with this young player. Excerpts:

The Reporter: You have been selected to play as a midfielder on the national team. How does it feel to shoulder such a big responsibility?

Right now you have played for the team in different matches. As we have seen with the game with Algeria and Malawi, you played well for the team. However, some comments were forwarded from fans and others that you are not shouldering the responsibility given to you. They are saying it is too much responsibility for you to accurately manage the midfield. What do you think about that?

I think everyone has a different point of view. Personally, I am not fully handling my responsibility. But I am doing all I can to do better, following the coach’s orders and that is what I am implementing. I will show a good performance in the coming matches.