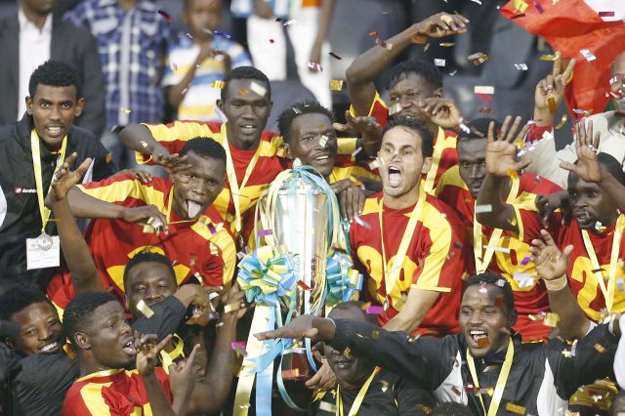 A solitary goal from Kenya international Allan Wanga was all that Merreikh needed to be crowned champions at the expense of APR of Rwanda in an engaging final which attracted Rwanda President, Paul Kagame who doubles as a Patron of the zonal body.

Wanga scored the all-important goal in the 25th minute, sinking the military side with a fine header off Ayman Said Mohamed’s cross.

The Sudanese dominated the first half with Malian international Mohammed Traore serving a real threat to APR’s defense which was kept on their toes every time the latter got hold of the ball.

Traore wasted a clear chance to double the lead when his shot went off target after dribbling past Emery Bayisenge and Yannick Mukunzi.

Few minutes to the end of the first half, APR FC suffered a major blow as Emery Bayisenge’s hamstring injury aggravated and was replaced by Herve Rugwiro.

In the second half, Isaie Isonga replaced Andre Buteera in bid to boost APR’s attacking power, a feat which paid dividends as Michel Ndahinduka struck a sharp shot only to be saved by eventual man of the match goal keeper Jamal Salim Magoola who put on a fine performance.

Magoola was again on hand when he punched away a long shot from Jean Baptiste Mugiraneza within ten yards as the military side pressed for an equalizer.

The Sudanese then wasted another chance to find the net when Traore beat the whole APR’s defense but none of his teammates was there to put to use his neat cutback pass.

APR goalie Olivier Kwizera who had a busy evening made a one-on-one save from Traore who unleashed a strong shot from the near post.

APR who have never been denied the title held on home soil could not do much but settle for runner-up position for a second-year running after Vital’O denied them the title last year in South Sudan. They had previously won all the three editions held in Kigali in 2004, 2007 and 2010.

The win enabled Merreikh to celebrate their third CECAFA- Kagame Cup title in the history of the regional tournament after 1986 and 1994.

Rwandan side, Police FC snatched bronze beating KCCA of Uganda 4-2 on penalties in the third place match after a 1-1 draw in normal time.

Merreikh bagged the top prize of US$30,000 while APR, by virtue of being second, pocketed US$20,000 and US$10,000 for Police, all courtesy of the annual support from President Kagame.