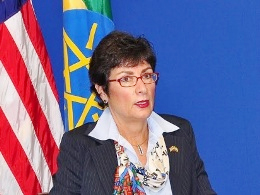 Addis Ababa, Ethiopia – The US government is providing up to 800 million US dollars annually for Ethiopia to advance the country’s development in the fields of health, education, agriculture and food security, and energy, the US Ambassador to Ethiopia said.

Ambassador Patricia M. Haslach said the United States is committed to working in partnership with the government of Ethiopia to better the lives of its people.

“We have a long and fruitful partnership with Ethiopia in development assistance projects,” said the ambassador, adding among those include the Feed the Future, Global Climate Change, Power Africa, Young African Leaders Initiative (YALI) and the Global Health Initiative, the Presidential Malaria Initiative (PMI) and several other President Obama’s initiatives which meet the GTP and MDGs.

“The contribution of the U.S in the health sector, particularly in reducing maternal and child death, is one of the most successful areas of development cooperation, and the largest amount of USG assistance goes to the health sector and we are proud to have supported Ethiopia’s attainment of MDG 4 to reduce child deaths under five by half,” Ambassador Haslach elaborated.

“Our current priority is to reduce maternal and newborn deaths and help Ethiopia move toward attainment of MDG 5,” she added.

Over the past decade the US government, through the President’s Emergency Plan for AIDS Relief (PEPFAR) has contributed over 2 billion USD in support of Ethiopia’s efforts to address HIV/AIDS, according to the ambassador.  “There has been tremendous progress. Ten years ago AIDS was truly a death sentence, disrupting the lives of millions of individuals and their families. Today in Ethiopia, new infections have been reduced by 90 percent, HIV-related deaths by 54 percent and more than 330,000 adults are now receiving antiretroviral drugs.”

Furthermore, the ambassador admired the Ethiopian competency in bringing regional integration and building lasting peace in Africa in general and in East Africa in particular.

The position of Ethiopia and IGAD countries on Somalia, and on security in the Horn of Africa coincides with that of the US, it was indicated.

Ambassador Haslach said USA also provides emergency relief to refugees and displaced persons hosted by Ethiopia. Ethiopia is a good host to almost 600,000 refugees from Eritrea, South Sudan and Somalia, she stated, adding that “We very much appreciate the fact that Ethiopia opened its borders and the hospitality it extended to this desperate people really needs to be acknowledged”.