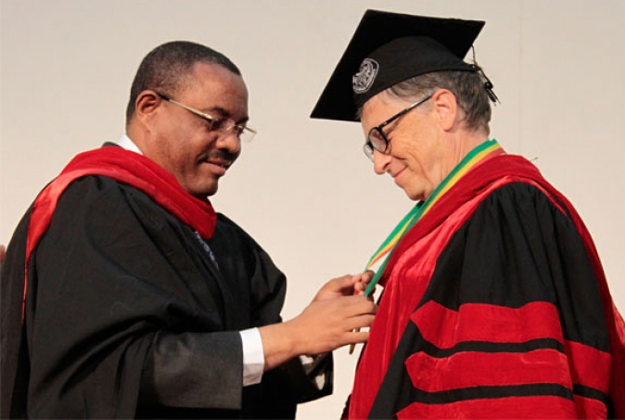 The honorary degree-giving ceremony was attended by numerous personalities, ambassadors of different countries, students of the university and higher officials of the government of Ethiopia, including Prime Minister Hailemariam Desalegn, Foreign Minister Tedros Adhanom (Ph.D.) Speaker of the House of federations and Board Chair of Addis Ababa University Kassa Teklebirhan and President of the University Admassu Tsegaye (Ph.D.)

During the ceremony, Prime Minister Hailemariam Desalegn stated that the award was given to Bill Gates not because he is the richest person but rather because of his engagement in philanthropic activities to support millions of peoples across the globe, including Ethiopia.

On his part, Bill Gates expressed his deep appreciation for his award, “I am deeply grateful for this honorary degree.”

“I never got my real degree. I dropped out to start Microsoft and never went back,” further adding, “so getting a diploma I can put on the wall and show my father is a relief.”

After the delivery of the honorary degree there was a discussion between Tedros Adhanom and Bill Gates with the audience that attended the ceremony and raised various questions both for Dr. Tedros and Bill.

Questions raised during the discussion include, what the foundation’s next plan in Ethiopia was and whether Bill Gates had plans in investing in Ethiopia and so on. The issue of democracy and development in Ethiopia and the issue related policies of the government in eradicating poverty in Ethiopia were also discussed.

Both personalities replied to the questions and Tedros Adhanom in defending his government policies says that both development and democracy can go hand in hand, still emphasizing that the process of democratization takes longer than economic development.

Though Bill Gates never graduated from college, dropping out of Harvard to start Microsoft, the American business and philanthropic mogul has received many honorary degrees from around the world and now his first from an African university.