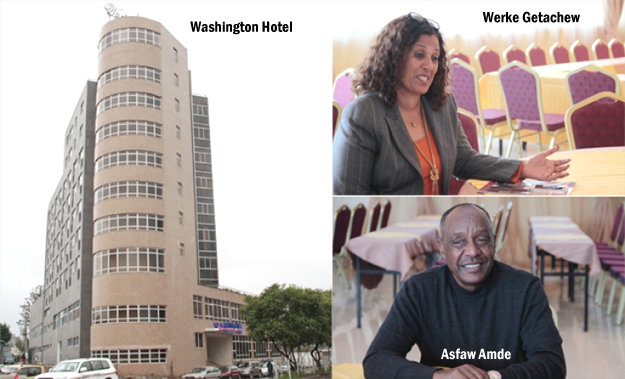 Addis Ababa, Ethiopia – The former Addis Ababa Restaurant in Washington DC on 18th street has now become Washington Hotel in Addis Ababa. An estimated 180 million birr has been invested to realize the concept of from capital to capital as the owners aim at fostering the sisterly cities’ cultural and people to people connection.

For over 30 years Asfaw Amde and his family have resided in Washington DC promoting Ethiopian cuisine and traditional lifestyle on 18th street. “A time has just come to get here,” he said. According to the family, Addis Ababa Restaurant in Washington DC has served the country in promoting the authentic religious and cultural values of the country.

Washington Hotel is located off Cape Verde Street in the commercial district of Addis Ababa in Bole Sub City on the road to the European Union (EU) Ethiopia office. “We have dealt with global hospitality companies to realize a distinct service,” Girum Legesse sales and marketing manager said. “We had sold our restaurants in DC and Silver Spring in 2005 to fully focus on Washington Hotel in Addis,” Meraf Asfaw, creative director told The Reporter.

After seven years of construction, the hotel is now open creating jobs for 135 citizens. It typically features a penthouse for presidential guests at a price of USD 950, which is hardly available in other hotels in Addis. It also offers prices ranging from USD 95 -160 for its 65 rooms designated as standard single rooms, twin bed rooms, and Washington suites. The hotel is laid down in on area of 1200 sq meters from which ground parking is secured for 50 vehicles and “a terrace that helps guests observe the city at 360o,” Girum added.

Because it lacks a swimming pool to claim a spot in the five-star hotels, it has now opened as a four-star luxury hotel waiting for an expansion to construct a swimming pool and other facilities, the owners explained.