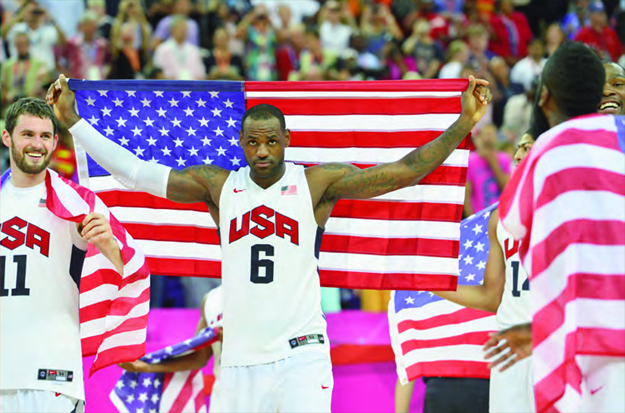 — Team’s First-Ever Visit to Africa to Include a Basketball Clinic In Dakar On Aug. 27 –
Press Release

The USA Basketball Men’s National Team will visit the African continent for the first time ever and will travel to Dakar, Republic of Senegal, on Aug. 27. The USA Team will conduct a clinic in conjunction with the Senegal Men’s National Team for Senegalese boys and girls at the Marius Ndiaye Stadium. The team will also tour Senegal’s historic Gorée Island and will conclude its visit by attending a reception hosted by the Senegalese government.

The team’s stop in Senegal will occur one day after the USA plays the final exhibition game of its 2014 tour in Gran Canaria, Spain, and three days before the USA starts play in the FIBA (International Basketball Federation) Basketball World Cup that is being held Aug. 30-Sept. 14 in Spain.

“We’re excited about this special opportunity to visit Dakar and learn more about Senegal and its people,” stated Jerry Colangelo, USA Basketball chairman. “This will be a terrific experience for our entire group – players, coaches and staff. Others have described this as a life changing experience. For our group to experience this firsthand is not just a great educational opportunity but also a great way for all of us to bond together as we go through our preparations for the FIBA World Cup. Hopefully our visit will have a positive impact on the boys and girls who will be involved in the clinic. I’m sure this will be an incredible experience for everyone.”

“We are delighted to host the USA Basketball National Team in Dakar in August” said Serigne Mboup, President of the Senegalese Basketball Federation. “We trust that the visit will have a positive impact on the youth participating in the clinic and will help to inspire more young players in Senegal to develop into leaders on and off the court and in their communities.”

“Giving back is important to me as it is for all of my USA teammates and our trip to Senegal will be an incredible opportunity to do that,” said USA Basketball Men’s National Team member Kevin Durant. “Hopefully we can contribute some excitement and joy to the boys and girls who are involved in the clinic in Dakar. I know whatever positives we’re able to give to them will be returned to each one of us several times.”

“The USA Basketball Men’s National Team’s first ever visit to Africa is a historic moment for the sport on the continent,” said Amadou Gallo Fall, NBA Vice President & Managing Director-Africa. “Having some of the most exciting players in the game coming to our region will shine a spotlight on the sport of basketball in Senegal and across Africa. We are grateful to the Senegalese government and the Senegalese Basketball Federation for their support and commitment to ensure this historic visit will have a lasting impact on efforts to grow the game of basketball and inspire the youth beyond the game.”

The USA men continue their World Cup preparations Aug. 18-22 in New York City. The USA’s training will include a practice Aug. 18 at the United States Military Academy as part of USA Basketball’s ongoing Hoops for Troops program. On Aug. 20 the Americans will play the Dominican Republic at Madison Square Garden. The USA men will return to the court and face Puerto Rico at Madison Square Garden on Aug. 22.

The USA National Team will conclude its tour with an exhibition game versus Slovenia on Aug. 26 in Gran Canaria, Spain.

The 2014 USA Basketball Men’s National Team tour will serve as preparation for the USA to defend its 2010 FIBA World Championship title that was won in Istanbul.

The 2014 FIBA World Cup, featuring a total of 24 national teams, including Angola, Egypt and Senegal representing Africa, is slated to be held Aug. 30-Sept. 14 in Spain. The USA was drawn into preliminary round Group C and will play its preliminary round games in Bilbao, Spain.

The USA opens the 2014 World Cup preliminary round play on Aug. 30 against Finland, and then faces Turkey on Aug. 31 in a rematch of the 2010 FIBA World Championship gold medal game, a contest in which the USA claimed an 81-64 victory. Following a day off on Sept. 1, the USA resumes play Sept. 2 against New Zealand. The U.S. will go against the Dominican Republic on Sept. 3, and will conclude its preliminary play on Sept. 4 facing Ukraine.