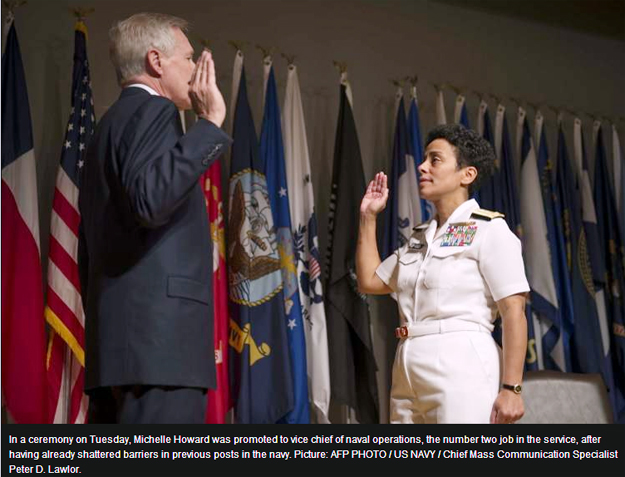 WASHINGTON-The US Navy has promoted a woman to the rank of a four-star admiral for the first time in its 238-year history, a milestone for females in the American military.

In a ceremony on Tuesday, Michelle Howard was promoted to vice chief of naval operations, the number two job in the service, after having already shattered barriers in previous posts in the navy.

Howard, 54, is known for commanding a counter-piracy task force in the Gulf of Aden that oversaw the 2009 rescue of a commercial cargo ship skipper, Captain Richard Phillips, who was abducted by Somali pirates.

“If you don’t believe today was a first, when I called to order four-star shoulder boards for women, they didn’t exist,” Howard said during her promotion ceremony.

Navy Secretary Ray Mabus said Howard had earned her promotion through “a brilliant naval career” and hailed it as “an historic first.”

“She will bear the burden of a role model and she is ready to bear that very well,” said Navy chief Admiral Jonathan Greenert.

Howard has blazed a trail since graduating from the Naval Academy in 1982.

She was the first African-American woman to command an American naval ship in 1999, taking the helm of the USS Rushmore, a dock landing vessel that transports amphibious vehicles.

Although she is the first female four-star admiral in the navy, the US Army and Air Force already have had women serve as four-star officers.

The promotion follows a recent decision by commanders to open up submarines to female officers and allow women to perform some combat jobs that were previously closed to female ground troops.

Since 1993, women have been allowed to serve on warships and fly fighter jets.

Howard was one of a small number of women who attended the US Naval Academy in the early 1980s. But women made up 25 percent of this year’s graduating class at the academy, an all-time high.

The promotion ceremony was held at Arlington National Cemetery‘s Women in Military Service for America memorial.