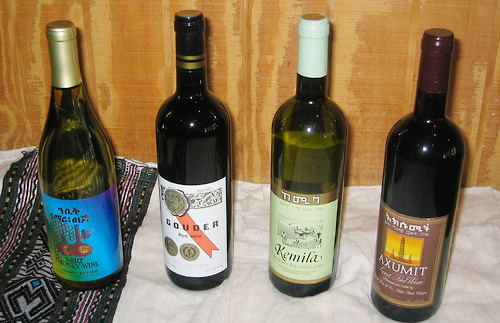 Addis Ababa, Ethiopia – Most food and drink on Ethiopian tables ends up becoming mixed into one. Coffee with tea or coffee and tea with milk and Coca Cola or Pepsi with mineral water or even wine are common. Increasingly popular for alcoholic beverages drinkers is the mixture known in Amharic as â€œande be andeâ€ (one to one), where you mix a bottle of wine with a bottle of beer and a bottle of Sprite in a large jug.

This drink is now popular at most places in Addis Abeba and it seems the only alternative ingredient one has at hand is switching between bottled beer and draught beer, and between Sprite, 7Up and one of the cola drinks. The Awash Wine (Vino) is a must have ingredient.

â€œThe demand for locally produced wines is high, but the company cannot provide us with the amount we request,â€ said Temesgen Dalecho, head waiter at Arada Bar located in Arada District, off Arebegnoche Street.

The company in question is the Awash Winery, which had been the only local producer for decades until a short while ago.

Awashâ€™s delivery vans make a weekly stop at Arada Bar, and the most they give them is five crates each of Saris and Guder.

â€œThey sometimes give us two or three crates saying they do not have enough,â€ Temesgen said.

Local demand is complemented by imports from South Africa, Italy and France.

Awash Winery became a single entity when the Derg nationalised two factories at Mekanisa and Lideta, both established by Italians, and a third factory at Addis Ketema, which was owned by Altaliva, a Greek company. The company now has a 500ha farm in Merti Jirsu, which was previously owned by the Upper Awash Agro Industry, and a 42ha plot in Zeway, about 163Kms south of Addis Abeba. The land where the Addis Ketema factory was located has been given to MOHA Soft Drinks, with the machinery moved to the wine factory at Mekanisa.

Awash Winery was restructured as a share company by the Privatisation & Public Enterprises Supervising Agency (PPESA) in 1984. Awash is now in private hands, bought for 459.9 million Br by Blue Nile Investment PLC â€“ a company established by Mulugeta Tesfakiros, owner of Muller Real Estate, and 8 Mile, an equity-firm chaired by Bob Geldof.