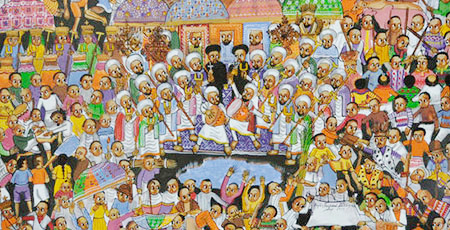 Addis Ababa, Ethiopia -Â Getachew Berhanu is well known for mirroring some aspects of Ethiopian traditions. Following in his famous fatherâ€™s footsteps (Berhanu Yemenu) his work is one of the most familiar and renowned in the Ethiopian art scene.

His work has been heavily influenced by his father who was a traditional church painter; his first teacher. According to the artist, he was not particularly good at academics. He says he preferred drawing than schoolwork. He would spend a lot of time copying his fatherâ€™s paintings until tragically his father passed away when Getachew was only 19.

His latest exhibition opened at the Alliance Ethio-FranÃ§aise on Monday June 2nd. Getachew started doing traditional painting in 1989, before carving a path that very few contemporary artists took, at the crossroads of narrative figuration, and social criticism.

His paintings are very colorful and bold and they touch upon religion and the history of Ethiopia. Getachew says he likes the influence of traditional arts as opposed to the current extreme and morbid art coming out of some other countries, in the name of modernity.

His work has been a subject of criticism by some as it shows many characters making some think that it is a bit cluttered. His work may seem a bit repetitive to some but people still cannot help but gaze at his paintings with interest and amazement as its blend of colors and scenes takes them on a journey.

This interesting painterâ€™s next exhibition will be held in Madrid, at a time to be determined.