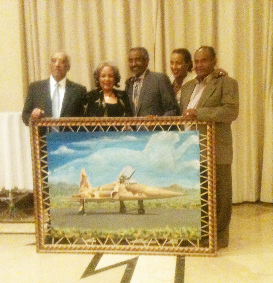 Association President Brigadier General Techane Mesfin said on the occasion that the support from various bodies will enable the association achieve its goals. He said that the association was established with the aim of facilitating economic opportunities to its members, sharing the Air Force’s experience to the public via writing books and other publications. The association will work jointly with similar associations at home and abroad, the President said.

Former President and association member Hon. Dr. Girma Wolde-Giorgis told the attendants that he joined the Air Force right after the Swedish left. According to him, around 80 cadets of his batch provided assistance including labour to realize the existence of the Air Force.

Col. Asfaw Ayelign, member of the association and producer of the book, briefed the attendants on its content that is about the history of Ethiopian Air Force from 1913-1983 E.C.

According to Asfaw, the book includes fascinating stories such as the story of bolting a wing of another plane on the chest of the flying plane that successfully flew from Debre Zeit to Tunis, which ,he said, is impossible to do.

Fund-raising Committee Chairperson and first president of Ethiopian Col. Simret Medhane also said that the AFVA is an association that advocates peace and equality its members serving as elders.

A documentary that narrated the 70 years story of the Ethiopian Air Force years grasped the attention of the attendants.

Some 1.5 million birr was raised at the dinner party attended by nearly 700 guests including Hon. Dr. Girma, government officials, Air Force veterans, and many others. The painting went to Col. Paulos Aklilu brothers and sisters .

Established three years back , the association has over 600 members.