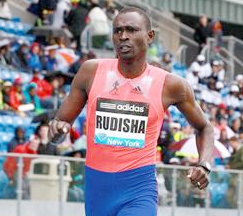 Eugene, Oregon â€“ The long wait by World Record HolderÂ David RudishaÂ to return to competition is set to end at the Prefontaine Classic on May 31st.Â  The 800 meter Olympic champion is excited to be finally racing at the highest level again, as his first start of 2014 will also mark his debut at historic Hayward Field. Given Rudishaâ€™s penchant for fast paces along with a field that includes four of the fastest nine in world history, the menâ€™s 800 is one of the yearâ€™s most anticipated events.

Â  Â  Â  Â  Â  Â Â Rudisha, only 25, has been dominating the world since he won gold at the 2006 World Junior Championships.Â  The Kenyan has been ranked No. 1 in the world byÂ Track & Field NewsÂ five times since 2007, and has set three world records, including the current standard of 1:40.91 set in winning the London Olympics.Â  Rudisha missed most of 2013 with a knee injury, diagnosed just a day before he was scheduled to run last yearâ€™s Pre Classic.

Â  Â  Â  Â  Â  Â Â Botswanaâ€™sÂ Nijel Amos, also still only 20, was closest to Rudisha in the London Olympics, taking silver as an 18-year-old.Â  His 1:41.73 in that race not only shattered the world junior record, it also made him only seventh ever to break 1:42 (and the only besides Rudisha this Century).Â  That was the only career meeting between the two.

Â  Â  Â  Â  Â  Â Â Many-time U.S. ChampionÂ Â Nick Symmonds, who was ranked No. 2 in the world last year, was confirmed for this year’s race but has had to withdraw with a knee injury.