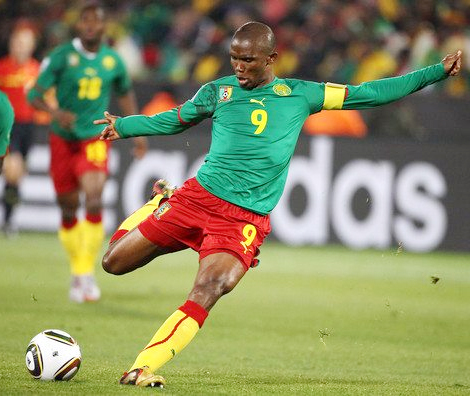 Indomitable Lions striker Samuel Eto’o was in the Ivory Coast from 14th through 18th May at the invitation of the Ivorian Board for Sports to grace the Copa Cola-Cola youth tournament. In between his busy schedule shuttling between the capital Abidjan and BouakÃ©, Eto’o took time to share his thoughts about the FIFA World Cup Brazil2014, predicting that Africa teams will do well and have a big say as to which way the trophy goes. The Lions go to Brazil together with four other African teams â€“ Algeria, Ivory Coast, Ghana and Nigeria.
What prospects do Africans have at the World Cup?African teams are likely going to do well in Brazil. And I state that there are reasons to believe in our qualities. In all major European championships, there are always African players that play major roles. The only problem in Africa is our leaders who do not respect us. Until we are respected, the others will never have any consideration for us. I say it, and restate it that Africa will have its say in Brazil.
What do you think about the Ivory Coast, presented as the best team on the continent?We are all of the opinion that CÃ´te dâ€™Ivoire is the best team on paper. Looking at the team it has no equal from an African point of view. But at the same time, I say that it is time the Elephants proved in the presence of everyone that they are the best. It is time they demonstrated their real character. They should explode in the sight of the entire world. And I think that it is time for this generation to make an impression on people.What do you think of Yaya TourÃ©?He is exceptional! Look at what he did with Manchester City. It is phenomenal. To me, there is no doubt that Yaya TourÃ© is the best player in the world. He has accomplished an extraordinary season. The goals he scores with his team are just incredible. If these were done by Lionel Messi, it would have been said immediately that he is the best player on the planet. Yaya TourÃ© scores goals that Lionel Messi, PÃ©lÃ© or other great players have scored.Being captain of the Indomitable Lions and being paired in the same Group as Brazil, arenâ€™t you scared of what lies ahead?We respect all our adversaries and the same goes for our World Cup Group A. It is true that Brazil will be the most popular before its people and home fans, but I’m not scared of this team, we will not be scared of them. In my career we have played against this team before. We beat the Brazilians at the 2000 Olympic Games in Sydney. There was a certain Ronaldinho in the team and many others. Etoâ€™o is not scared. Cameroon is not scared.What is the true nature of your relations with the coach, JosÃ© Mourinho, who once remarked that you were old?Contrary to what a puppet says about my age, I am still physically fit. At 33, I feel real good. I have proven that I could do better than youths. And I wish to also say that I am not going to the United States or to the Middle East. I will continue at the top level. I will continue to play the Champions League. My romance with this competition is far from over. I will not tell you where, but I will be at the top level. I am 33 and I have two World Cups to play. Before me there are other players who went on until the age of 41. So I can continue.Following the World Cup, you will return to Ivory Coast and Cameroon contesting qualifiers for the 2015 Africa Cup of Nations. Do these encounters excite you?Those games are still far off. When the time comes, I will consider that. I wouldnâ€™t like to make a statement about a match before which many things can still happen.Â A football icon, what are Samuel Etoâ€™o relations with African youths?I have always said that youths are the present and the future. We have to show them the way so that they could live their dreams. My case is a real life lesson. I left for Europe too early and that was a bad choice. When I realised that it was a dead end, I decided to return home. I knew that education was the best weapon, if I had to succeed. That helped me very much when I got to Real Madrid. If I had not known how to read, I would have faced serious difficulties at that time.