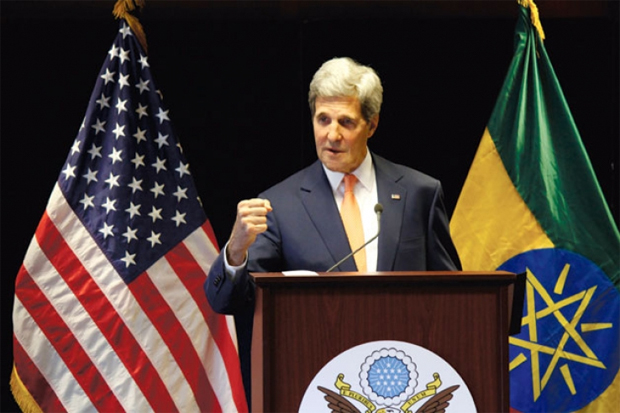 Addis Ababa, Ethiopia –The US Secretary State John Forbes Kerry’s visit to Addis Ababa may not be diplomatically as smooth as planned earlier.

He was eyeing to deal mutual cooperation and strengthening the already cemented relation with Ethiopia. He was also in a mission that was aimed at stretching the bilateral relation from the traditionally known of aid and regional security based relation that have tied the two at least for the past two decades to at least one more sectorâ€“trade and investment.

However, shortly before his visit, what awaited for him was concerns and challenging agenda as Ethiopia saw unprecedented arrest of three journalist and six bloggers. Additionally, the other coinciding concern at the same time is the unexpected bursting of students protest mostly at regional towns universities protesting over the proposed but not approved Addis Ababa’s integrated masterplan which eventually.

Ever since the two incidents occurred, several Ethiopians and non-Ethiopians been intensifying urgent call to John Kerry to keep pressure against Ethiopian government particularly via Twitter and Facebook with a hash tag #JohnKerry, #FreeZone9bloggers, #freejournalists.

During a press conference he gave on Thursday afternoon at Sherton Addis after meeting PM Hailemariam Desalegn and his counterpart Tedros Adhanom (Ph.D.), the US Secretary of State addressed the issue of the detained journalist and bloggers among sorts of issue like the bilateral relation, South Sudanese conflict and its consequences and regional as well as continental security matters at large.

â€œI made clear to Ethiopian officials that they need to create greater opportunities for citizens to be able to engage with their fellow citizens and with their government by opening up more space for civil society. I shared my concerns about a young Ethiopian blogger that I met last year, Natnail Feleke, who, with eight of his peers, had been imprisoned. And I firmly believe that the work of journalists, whether itâ€™s print journalism or in the internet or media of other kinds, it makes societies stronger, makes them more vibrant, and ultimately provides greater stability and greater voice to democracy. To support economic growth for the long term, the free marketplace of ideas matters just as much as free markets. Itâ€™s a testament to the strength of our friendship with Ethiopia that we can discuss difficult issues, as we do, even when we disagree on one aspect of them or another,â€ Kerry said.

He also underscored that the Ethiopian government should not use the anti-terrorism legislation as a tool to silence the effort of freedom of expression.

We believe that it is very important to full measure of constitution is implemented. We shouldn’t use the anti-terrorism proclamation mechanisms to curb the free exchange of ideas.

Recalling that the US had called on Ethiopian government previously for the release the detainees, Kerry also said, In my meetings with all public officials, I will always press the interests of the political space being opened up and being honored. And so we have previously called for the release of these individuals, and that is the policy of our government, and it is a serious policy, he said.

Speaking the economic cooperation with Ethiopia, he indicated that US remains committed to keep supporting Ethiopia’s s growing economy.

“We do that because strong commercial ties and this rate of development are critical to having shared prosperity, critical to providing opportunity to the broad population, and they also help provide stability and the capacity for Ethiopia to be able to lead in some of the other initiatives that are so critical to stability in the region,” he told a press conference.

Read more at The Reporter