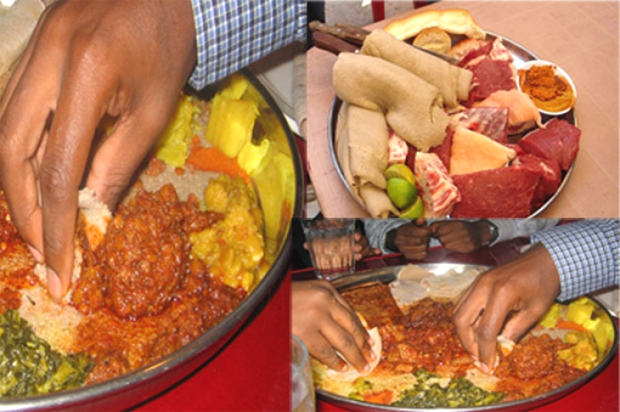 Addis Ababa, Ethiopia –Â Shibre Amsalu, a housewife and mother of three, is preparing for Easter, a Christian holiday celebrated with a huge feast mainly featuring beef and dairy products.

As she carefully allocates her holiday shopping budget the news on BBC World Service catches her eyes. â€œEating seven portions of vegetables and fruits can reduce one’s chance of dying by 42 percent,â€ the news heralds quoting a recent research outcome. The findings of the research conveyed an important message to the millions of viewers worldwide. Indeed, she has sustained herself on grains, fruits and vegetables for the past two months because of the biggest lent season in Ethiopia, Hudade. As a member of the Ethiopian Orthodox Church, she ruled out beef, milk, egg and butter from her dining table since the very day she started fasting. This time, she is pondering critically if shifting back to her regular meals consisting of beef and milk products is the right choice for her.

â€œI think I need to get it right. I need to consider my familyâ€™s meat eating culture if I am to have a healthy bunch,â€ she murmurs. In a country where the majority of the population belongs to this ancient and authentic religion, food production, marketing and consumption are highly influenced by this culture. Vegetables and fruits become main items of the market during this lent season. Atikilt Tera, the major fruit and vegetable market in the capital sees its worst and busiest time during the fasting season as many flock to this vegetable center contributing to the commotion and chaos. Â Located near the largest open market in the continent, Mercato, Atikilt Tera stirs up the cityâ€™s food market. Trucks, lorries and various beat up vehicles drive through the wet and muddy market every day. Consumers usually find it difficult to get in and out because of the swollen crowd. Vegetable brokers, locally called delalas, appear to be in control as they shout and call for buyer monitoring everything in their surrounding.