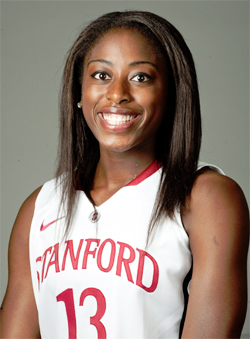 Nigerian-American Chiney Ogwumike of Stanford is expected to be the top overall pick when the WNBA draft draw will take placeÂ in Uncasville, ConnecticutÂ next Monday.

Ogwumike, who was third in the country in scoring this year (26.6 points per game) and fourth in field-goal percentage (60.8 percent), led the Cardinal to a 29-3 record in the regular season. However, Stanford lost to eventual winner UConn in the playoff.

She was also `honored as a member of The Associated Press women’s basketball All-America team for the second straight season, this time as a unanimous selection.Â

Ogwumike has a 3.46 GPA. Her adviser was former Secretary of StateÂ Condoleezza RiceÂ (now a Stanford professor). She spent time in Nigeria, where her parents grew up, last spring as part of her major.
COLLEGE HIGHLIGHTS
Three-time First Team All-American, two-time Pac-12 Player of the Year, three-time Pac-12 Defensive POY, four-time All-Pac 12 First Team, and a finalist for multiple national Player of the Year awards each of last three seasons. Helped Stanford to Final Four as frosh and sophomore alongside sister Nneka. If selected with top WNBA pick, as Nneka was in 2012, theyâ€™d join Peyton and Eli Manning as only siblings selected No. 1 overall in NFL, NBA, MLB, NHL, WNBA. Earned nationâ€™s top student-athlete academic honor (Capital One Academic All-American of the Year) for womenâ€™s basketball by CoSIDA, following in footsteps of Stanfordâ€™s Andrew Luck, a fellow Houstonian and No. 1 overall pick in 2012 NFL Draft. Pac 12â€™s all-time leading scorer (surpassed Candice Wiggins) and rebounder entered 2014 NCAA tourney as only Div.1 player to rank in top 10 in scoring (3rd), FG% (3rd), double-doubles (6th), and rebounding (7th). PROUNOUNCED: CHIH-nay.