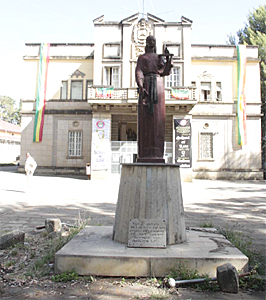 Addis Ababa, Ethiopia -Â In 1962, when I was working in my law school office at the University of Pennsylvania, the phone rang, and after a lot of operator chatter I was connected with the Imperial Palace in Addis Ababa.

My Ethiopian caller identified himself as the newly appointed president of the newly created Haile Selassie I University [Kassa Wolde Mariam]. He said to me, “I am standing in the presence of His Imperial Majesty who commands-I mean requests-I mean invites-you to come to Ethiopia to start a law school in his new university as its first dean. Will you come?”

I had been to Ethiopia several times and had tried to learn a little about that unusual country. The challenge of establishing legal education there had already fascinated me. In terms of its size, history, and antiquity (as an independent polity); its culture (for example, its ancient written languages, a Christian church dating back to the 4th century combined with a sizable population who embraced Islam); and its variegated geography (rugged mountains and plateaus, formidable deserts and fertile agricultural regions), Ethiopia was indeed distinct.

These are the words of Professor James Paul, founder of the Law School, from his written reflection in 2000 describing how he got the chance and why he is interested to come to Ethiopia after watching some of his students being in charge of key government positions.

The School of Law at Addis Ababa University is the first and oldest Law School in Ethiopia. It was founded in 1963 with the intention of preparing trained professionals to interpret and apply the many new laws the country was enacting as part of the modernization process. It has for many decades been the main supplier of the nations need for trained legal manpower.

In recent weeks, the Law School has been celebrating its 50th year with different ceremonies. The forum was an appropriate venue to learn, evaluate and plan from the past, the present and the future of legal education in Ethiopia. Former graduates and participants shared their memories and experiences of the School to the Reporter.