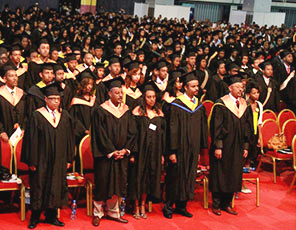 During the graduation ceremony held at the Millennium Hall on Saturday August 31st, President of the University and Chief Executive of Midroc, Dr. Arega Yerdaw said that the University has put aÃ‚Â  special emphasis on the fields of Management and Leadership, while continuing to provide courses in the fields of Engineering, Mining, Information Technology, Architecture, Urban planning, and Mechanical Engineering. Selam Nurses College will continue to expand its Clinical and Pharmacy studies, he added.

The President declared that Unity University is working to be the premier academic institution and center of excellence in Ethiopia, especially in the fields of Management and Leadership, referring to a number of alumni who now work as managers in various fields.

In contributing to the quality of education, he also stated that they are working to create students that can easily transfer to the University through the formation and of opening of the Unity Academy, where students can study from kindergarten to 4th grade. The academy is set to open in the coming New Year.

During the graduation ceremony, the owner of Midroc Ethiopia and Chairman of the University, Sheik Mohammed Hussien Al Amoudi gave out degrees and diplomas as well as awards to those students who scored high ranks. Al Amoudi, besides promising to make Unity one of the best universities in the world, also made a promise to help the disadvantaged who, due to economic reasons, are not able to attend universities. Special awards named after Al Amoudi were also handed out to a number of individuals who were said to have contributed immensely to the university. Among those who were recognized was Shetaye Menale, Deputy Speaker of the House of PeoplesÃ¢â‚¬â„¢ Representative for being the first woman in Ethiopian history to occupy that position.