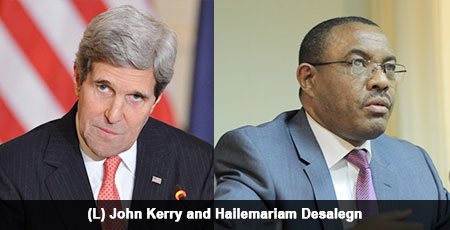 The United Statesâ€™ State Department annual report this year has toughened its tone in condemning Ethiopiaâ€™s record on rights, even Secretary of State John Kerry, grouped the country with Cuba, Belarus and China. This, former diplomats and experts say, is an indication that Washington will be testing the new leadership in Addis Ababa to see if itâ€™s willing to embrace political reforms ahead of 2015 national polls.

Successfully staging the countryâ€™s first ever peaceful power transfer, the ruling party has consolidated its control. There is however no sign that the government of Prime Minister Hailemariam Desalegn is heeding Washingtonâ€™s calls for major reforms. A spokesperson for the PM earlier this week said any legislative or political reforms have to be â€œorganicâ€ and initiated by the governmentâ€™s own assessments.

Significant shiftÂ
Annually compiled by American embassies across the globe, the State Department submits to the US Congress detailed reports of human rights conditions on all United Nations members while those receiving assistance from the US are particularly targeted. Ethiopia, receiving about one USD billion in annual aid from the US, and much more from multi-donor establishments such as the World Bank where Washington holds significant controls, falls among a list of nations which receive stronger scrutiny.