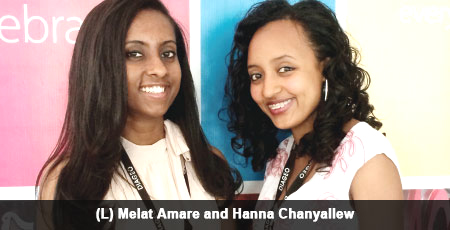 This involves training recent graduates or students who are just about to finish college for managerial positions with real responsibilities and jobs in its office. This year seven recent graduates got the opportunity.

The trainees first apply for the job online through Diageoâ€™s career site. They are then given numerical and reasoning tests. Those who pass are interviewed on the phone. Finally those who pass go to the assessment center where they conduct role play exercises to know how they would act in a professional environment.

Hanna Chanyallew, a law graduate and Melat Amare who has bachelors in marketing are two of the seven recruits. Hanna is currently working in the human resources division while Melat works in sales.

According to Blayne Tesfaye communications manager at Diageo, most of the trainees end up working for the company in managerial positions. Agbonlahor Francis,Â Managing Director of Diageo Meta Abo Brewery was a former graduate programme beneficiary. This is the fate that awaits the seven recruits as they go on.

Though it started in Ethiopia recently, this is not a new phenomenon for Diageo. Over the last five years more than 550 graduates have joined the Diageo team through this program in Africa alone. They came from Nigeria, Ghana, Kenya, Cameroon, South Africa, and Angola. Recruitment occurs once every year.

Diageo entered the Ethiopian beer market in January 2012 when it spent USD 225 million to buy Meta Abo Brewery. Some of its most famous brands include Guinness Stout, Johnny Walker whiskey, Baileys Liquor and Smirnoff Vodka. It is the largest producer of spirits worldwide.