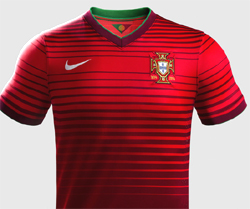 The American sportswear giant, whose partnership with the FPF dates back to 1997, will continue to provide matchday and training wear to Portuguese representative sides at all levels until at least after the 2018 Fifa World Cup. It will also create a range of replica merchandise for Portugal fans.

The extension was confirmed ahead of Portugalâ€™s 5-1 friendly win over Cameroon this week, in which captain and Fifa Ballon Dâ€™Or winner Cristiano Ronaldo scored twice to become Portugalâ€™s all-time record goalscorer with 49. For the first time Portugal wore the kit they will use at this summerâ€™s Fifa World Cup, where Nike will also be providing strips to hosts Brazil and the likes of England and the Netherlands.

Nikeâ€™s director of sports marketing for the Iberian region, Alberto Baronet, said the company was â€œvery satisfiedâ€ with the renewal and wants the partnership to go on beyond 2018.

Portugal will play in Group G in the first round of the 2014 Fifa World Cup, opening up against Germany at Salvadorâ€™s Arena Fonte Nova on 16th June before further tests against the USA and Ghana.