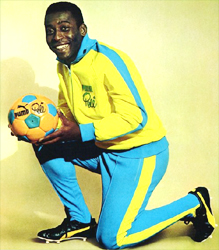 Soccer Post D.C. will now have PUMA as its third large soccer supplier. Puma has represented many soccer players and teams throughout the decades, including Pele.

Fairfax, VA. From 1948 until today,Puma has made its mark on and off the pitch. Rudolf Dassler, brother of Adidas founder Adolf Dassler, had a vision of making soccer boots to help players play better. It started with the first screw-in cleat named Super Atom in 1952. In 1962, the world would see the best soccer player in the world sporting Puma soccer cleats. His name was Pele and he wore the famous Puma King cleat along with other top soccer players around the world. Today, top players like Aguero and Fabregas wear Puma cleats on the pitch.

Adidas and Nike are crowned as the two kings in the soccer industry, but Puma has found ways to find success among their supremacy. Puma cleats are revolutionary and are crafted with the same materials as the finest cleats on the market. The new evoSpeed cleat for instance is made for players who want speed with its sleek and superlight design. The famous King is still around, but has seen some change in materials and design. It is still holds true to having a leather upper and having a classic look. Puma cleats are sure to stay as a true competitor in the soccer cleat market.

The apparel collections from Puma present themselves well with all the bright colors which is the trend in soccer gear right now. As a testament of the great quality of apparel Puma produces, Italy,Dortmund as well as many other African, South American and European clubs wear Puma uniforms. When the 2014/2015 English Premier League season comes around, you will notice famed club, Arsenal, sporting a Puma uniform instead of Nike. The Arsenal sponsorship for Puma will cost around $45 million a year. Puma is definitely making great strides by outfitting top clubs in their apparel.

Puma is going through a rebirth and proving how important they are in the soccer specialty market. From new, innovative cleats to huge uniform sponsorship deals, they are headed on the right track. The style, vision and history of Puma will be sure to keep them among the top brands in the soccer industry for a long time.