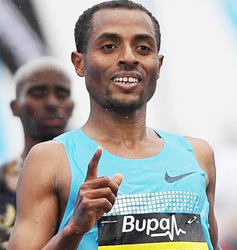 It will be Bekeleâ€™s first ever 10km in the UK and it promises to be another classic confrontation on British roads for the 31-year-old, following the Ethiopianâ€™s stunning return to world-beating form at the Bupa Great North Run on Tyneside last September.

It was there that he debuted the 13.1 mile half-marathon distance and claimed the prize scalp of Mo Farah, Britainâ€™s world and Olympic 5,000 m and 10,000 m champion, in a thrilling sprint finish. Another Ethiopian all-time great of distance running, Haile Gebrselassie, finished in third place.