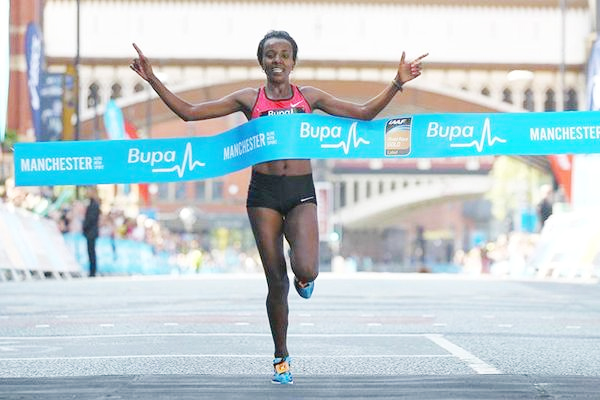 Tirunesh Dibaba, the reigning World and Olympic champion at 10,000m, is returning to the north west of England to defend her title in the Bupa Great Manchester Run, an IAAF Gold Label Road Race, on Sunday 18 May.Â

The 28-year-old Ethiopian reduced the womenâ€™s course record to 30:49 last year, and will return to Manchester following her impressive marathon debut in London the weekend before last.Â

Dibaba has been a trailblazer in womenâ€™s distance running for more than a decade now.Â

She became the youngest ever womenâ€™s individual world champion when she won the global 5000m title as a 17-year-old at the Stade de France in Paris in 2003.Â

The diminutive runner became the first woman to complete an Olympic double at 5000m and 10,000m when she struck gold at both distances in Beijing in 2008. In all, Dibaba has won three Olympic gold medals after she successfully defended her 10,000m crown at the London 2012 Olympic Games, and five World titles on the track.